It is said that the female of the species is deadlier than the male. It’s highlighted when men abuse women, but just like the story of man bites dog, when a woman abuses a man it often gets a mixed reaction. 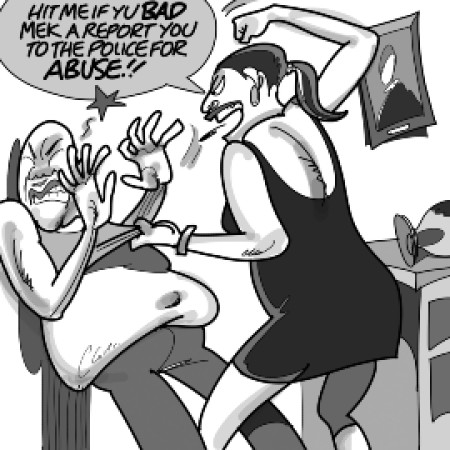 Some may doubt the authenticity, while others may simply dismiss it, laugh at it, treat it as an aberration and even scoff at the victim for daring to report it. But in the same way that female victims feel powerless, male victims often also feel as if they have no path of escape to take, no reprieve from the constant clobbering.

There are women who actually abuse men in the most horrible ways, and statistics outlined that of the all the reported cases of domestic abuse, forty percent are from abused men.

‘Staggering statistics of these abuses, truly undeniable, but it’s instructive how shame and pride blankets the emotional and psychological pain that men go through at the hands of abusive women across the World. Men mercilessly beaten, slapped, pinched, bitten, kicked by his wife.’

That’s from a research paper.

Many of these cases are not reported to the police, as the shame, ridicule that goes with it is often more difficult to bear than the actual abuse. “Are you saying that your wife beat you on a regular basis? Sarge, yu hearing this? Hahaha.” But it’s no laughing matter.

Recently there were videos in Jamaica making the rounds on social media with one showing a burly woman draping up a man in his pants waist and slapping him repeatedly with the broad side of a machete.

Clearly she was skilled in the use of the implement, for he didn’t get cut, but his emotional wounds were deep. Not once did the man retaliate.

Her motive, it’s alleged, was that he was spreading spurious gossip about her. The other video showed a woman slapping and punching a man in full view of countless observers. He too did not retaliate, and to add fuel to the fire, people actually chided and berated him as she rained blows down.

While she continued her barrage, she could be heard saying, “Hit me if yu bad, punch me if yu think say yu bad.” The man did not. Those two instances were captured on phone cameras, but there are countless others that never see the light of day, but are the shame of many helpless men who suffer in silence.

Surprisingly, many of the men are not small in stature, but they refuse to retaliate. Maybe it’s how they were brought up, never to hit a woman.

Research says that a woman’s upbringing can make her into an abuser. Chances are, her parents or previous partners were abusive to her.

This refusal to retaliate gives the woman encouragement to abuse the man even more, for she feels her strength, and her power grows as his decreases. She knows that he won’t strike back, so like all bullies do, she increases the tempo.

Can you imagine what would happen if after that first blow, that man delivered a liberating left hook or an uplifting uppercut? Not only would she never dare hit him again, but he’d be reported to the police for abuse and possibly arrested.

And it’s not only physical abuse, but emotional, mental, spiritual and sexual. Women abuse men sexually by denying them of pleasure.

Others abuse verbally, sometimes in private, oftentimes in public. It’s not physical, there are no scars, but the intangibility of it does not make it any less painful. The bottom line is, women who abuse men have absolutely no respect for them whatsoever.

It’s a secret shame that many people do not speak about.