Ambassador, the Honourable Anthony Johnson will fondly be remembered as a man for all seasons, who walked the hallowed halls of greatness with a strong measure of humility. 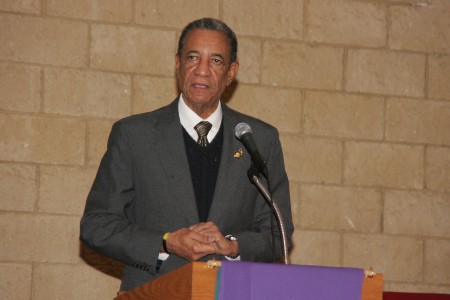 He leaves the Jamaican political and social landscape with a clear legacy as a genuine patriot, an intellectual, an educator, a statesman, a diplomat, and a humanitarian, among the number of distinguished hats he wore during a well lived life.

After his appointment as High Commissioner to London in 2010, I succeeded Ambassador Johnson to the office of Ambassador of Jamaica to the United States and recall with gratitude his graciousness whenever I had reason to call on him about any matter of issue during his tenor.

I am therefore conveying heart-felt condolences personally and on behalf of the staff of the Embassy of Jamaica and members of the large Jamaican diaspora here in the United States, to his dear wife Pamela, his daughter Senator, the Honourable Kamina Johnson-Smith, Minister of Foreign Affairs and Foreign Trade, his other children and  members of the extended family.

Much will certainly be shared about Ambassador Johnson in the days to come, but there is no doubt that he has led admirably in each of the many fields in which he has operated. As Prime Minister Andrew Holness has observed, “his passing has left us heartbroken” which captures precisely the sentiments of many, hearing of Ambassador Johnson’s passing.

Service is a hallmark of the life he led, and he will long be remembered by compatriots and friends of Jamaica in the United States, especially fondly in Washington, DC, where he earned much many friends as he represented the interests of Jamaica before the United States government. His was also a well-respected voice in the Organization of American States, where he was our country’s Permanent Representative, speaking often for the Caribbean Community citizens and governments.

Thus, the Johnson family and Jamaica at large can be comforted in the knowledge that Ambassador Anthony Johnson led a life of significance and service which will long be remembered.

May his soul rest in eternal peace.