Wives do get their fair share of criticism, but is it justified? Well, the cockney slang for wife is, ‘trouble and strife,’ and some folks refer to them as the old ball and chain 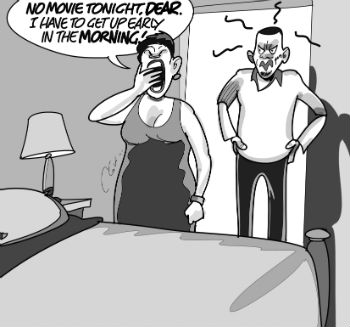 Recently I was speaking with a colleague of mine and I asked him about his new wife. I never expected his response. “Adjusting to married life is a struggle and kinda freaking me out.” I’ve heard the same from other men who have been married for a long time, and usually they wistfully compare the wife to the girlfriend of yesteryear.

Both have their pros and cons, but many men sort of lean towards the memory of the girlfriend rather than the wife. Is this justified, or is it that perhaps they became so chastened by their wives that their memories got clouded, in the same way people refer to the good old days.

I asked them to compare. Well, first of all, the girlfriend is usually a younger model, and always manages to keep herself well put together and attractive.

Also, a girlfriend is not yet a wife, so if she wants to become a wife, she has to not only attract the man, but keep him interested in her.

Many wives, after a few years, tend to let go, get relaxed, can’t bother to look attractive anymore, settle into a routine and become same old same old to their man. No longer are they making any effort to keep the man interested in them. After all, they have him already.

When it comes to romance, the girlfriend is always ready and raring to go and will not only jump through hoops, but will cartwheel head over heels to please her man. Never will you ever hear of a girlfriend depriving her man of romance.

Wives on the other hand have a reputation for reducing romance as the years roll by. Somehow it’s no longer a priority and they can take it or leave it.

Girlfriends seem to have more energy and always want to do something. “Come Honey, let’s go to the movies, the beach, nightclub, jogging.” Wives somehow always seem to be tired. “Oh, I have to get up early in the morning.” “I have to wash my hair tonight then put in curlers.” “I have to prepare the children for school tomorrow.”

Girlfriends are compliant and always want to please their men. Wives tend to be bossy, critical, miserable, and are always giving instructions. “Mow the lawn, take out the garbage, feed the dogs, get the car washed.”

That’s why some men have the best of both worlds as they have their cake and eat it too. They have both a wife and a girlfriend, satisfying different needs. But having a girlfriend alone can be risky, for in many cases, if the man’s fortune changes, she’s not going to stick around.

If he gets sick, she’s not going to be any nurse. “Listen, I didn’t sign on to be any nursemaid to any man, I’m outta here.” Whereas a wife may stick around through thick and thin, a girlfriend has no such commitment, and will move on faster than you can say hypertension.

But what about the wife who’s also a girlfriend to another man? How come she reverts to the girlfriend mode and does all the things that girlfriends do? She keeps herself attractive for her lover, is very attentive to him, and offers him much excitement.

How can she be different things to different men? Many men say that their wives are passionless boring women, only to have another man describe her as a raging torrent of sensuality.

The irony is, many girlfriends turn into wives and display the same characteristics as wives do. “Look how drastically she changed after she got the ring.”