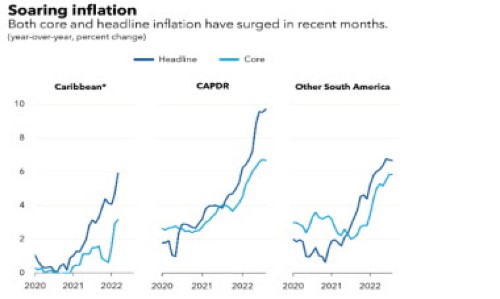 As inflation continues to be elevated across Latin America and the Caribbean (LAC), the impact on real incomes and purchasing power remains a key challenge, especially for the most vulnerable.

We looked into this challenge from the perspective of smaller economies in LAC by analyzing recent inflation dynamics for three sub-groups of small economies: Central America, Panama, and the Dominican Republic (CAPDR); the Caribbean; and the smaller economies in South America, Bolivia, Ecuador, Paraguay, and Uruguay.

Our work shows that high inflation is a bigger challenge in smaller economies because they are less diversified, rely more on imports, and have more limited policy levers at their disposal. The poorest households have been hit the hardest and food insecurity is on the rise.

Many of these countries have pegged exchange rates and do not have an independent monetary policy. Thus, they had to rely on temporary fiscal measures, of which about half were targeted to the most vulnerable. Countries with larger pre-existing subsidies tended to introduce smaller measures.

Inflation on the rise

During the first half of 2022, inflation reached multi-decade highs in many of these countries. The latest available inflation data for August reveals that yearly headline inflation exceeded nine percent in CAPDR and six percent in the smaller economies of South America.

In the Caribbean, it reached almost six percent in March. Core inflation showed similar trends, staying at lower levels than headline inflation since it strips out food and energy prices.

Smaller economies are typically less diversified and rely more on imports, making them more susceptible to inflationary pressures arising from higher import prices. Also, food and fuel – both of which have experienced large price increases since the beginning of the war in Ukraine – account for a larger share in the consumption basket in these economies.

The ongoing inflation wave is hurting the poor more given the rapid increase in food prices. Inflation estimates across income quintiles in CAPDR show that over the past few months, the poorest quintiles have faced considerably higher inflation rates than the richest quintiles.

The main driver of this discrepancy has been the increase in food prices. These developments may worsen food insecurity further, which had already increased during the pandemic.

Many countries worldwide have implemented measures to mitigate the impact of higher global energy and food prices in the domestic economy, particularly after the start of the war in Ukraine.

We find that the pass-through from international to domestic fuel prices has declined from about before the war, that is domestic prices were moving almost one-to-one with international prices on average during 2015-2021,  to about 0.8 after the start of the war.

A similar decline has been observed in the pass-through from international to domestic fuel prices in the smaller countries in LAC.

Several constraints have shaped the policy responses. Many small LAC economies have currency pegs and thus less policy flexibility to address the impact of the price shock. Only a few of these economies have increased policy rates to contain second-round effects and keep inflation expectations anchored.

To mitigate the impact of higher global energy and food prices, they have implemented discretionary fiscal policy measures, most of which were announced as temporary and about half were targeted to the most vulnerable.

The size of the fiscal measures has varied across economies, they have been larger for economies with larger weights of food and transportation in their consumer price index (CPI) basket, weaker social safety nets, or lower income per capita.

Looking at the new measures and their costs provides a partial picture because some countries already had in place extensive subsidies on food and fuel. When comparing existing energy or food subsidies with the cost of new measures, we observe that countries with larger pre-existing subsidies tended to introduce smaller measures.

Policymakers should be prepared for a possible long-lasting inflationary shock. Given the uncertainty around the intensity and duration of the shock, the following general principles can help policymakers navigate through these turbulent times: (i) domestic prices should adjust to international prices, while providing targeted and temporary support to the most vulnerable; (ii) if targeted measures are not feasible, price smoothing mechanisms with clear exit strategies could help while social safety nets are strengthened; and (iii) consider offsetting revenue or spending measures to limit overall fiscal impact.