Let’s face it, there is a big difference between a bachelor and a spinster. True, they both have one thing in common, and that’s the single life, but whereas the bachelor has no wife, the spinster only has strife. 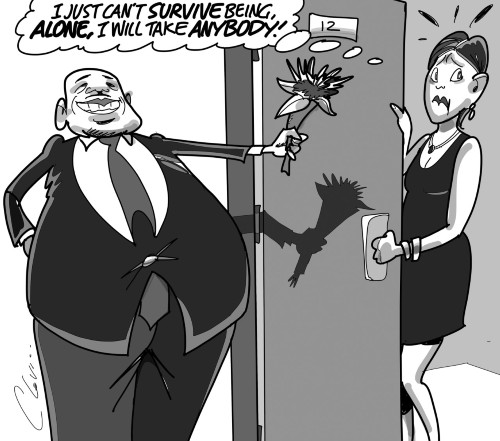 But who says that the life of a bachelor is all peaches and cream, a bed of roses, let the good times roll, while the spinster has nothing but hope and unfulfilled dreams to occupy her empty life?

Most bachelors boast about what a good time they’re having, which is often far from the truth. If they were having such a great time, then why do they get married eventually?

At least the spinster will admit to a life of abject loneliness, emptiness and lack of emotional fulfillment as she wishes and hopes for an end to her despair.

The bachelor life seems most appealing at the outset. After all, the man can come and go as he pleases, spend as much time as he wants, wherever and whenever he so desires, and answers to no one.

The bachelor can pick choose and refuse from the bevy of beautiful women who are at his beck and call, and none of them will ever give him any backchat. It all seems so idyllic, so perfect, straight out of a James Bond movie where Bond just tours the world and plays the female field. Shaken not stirred, Bond has a license to thrill.

I guess if you’re young, good looking and a man of means, then the bachelor life must seem to be a good prospect. But that is not always the case, as many bachelors, single men, are just embracing the illusory fantasy of the playboy, but actually live a life of loneliness.

Loneliness is not to be trifled with, not to be taken lightly. It is foisted upon you like a dark cloud that descends and envelopes the soul of the afflicted. Some women get involved with men just to avoid being lonely. “I just can’t survive being alone, I will take anybody,”

So the bachelor seeks a companion, but he is conflicted, for he wants company, yes, but only on his terms, nothing permanent. He literally wants to eat his cake and have it too without having to wash the dishes afterwards.

He therefore seeks a partner for his emotional and physical gratification, but after he’s satisfied, he wants her out of his space.

And that’s why bachelors who can afford it have women here, there, everywhere, with no strings attached as they build up a reputation of being a lady’s man, a Lothario, a man about town.

Remember what I said, being a bachelor is for the young and well off man, for one day the party will be over, and there will be no bevy of beauties to come and share his life, recognize his illness, dispense his medication. Maybe that’s why there are no old bachelors, they all get married eventually.

The spinsters though, now that’s another story. Even the word spinster has a negative connotation, a sad image, tinged with pity and is not someone who is admired. Spinster: ‘an unmarried woman, typically an older woman beyond the usual age for marriage.’

It’s like a curse, a yoke that bears down on a woman’s shoulders that marks her for eternity. “It’s a woman’s business to get married as soon as possible, and a man to keep unmarried as long as he can.” George Bernard Shaw.

Spinsters don’t have much time to play with, and are in reality in a race against the clock.

And yet it’s different for the bachelor who has no statute of limitations. “He’s one of the most eligible bachelors around.” Are there no eligible spinsters? So, Single Men Joy or Women Misery? You choose.