You cannot force yourself on someone or force them to love you. Too many people cling desperately to relationships that have run their course, when the sparks no linger flicker and the embers have lost their glow and turned to ashes. 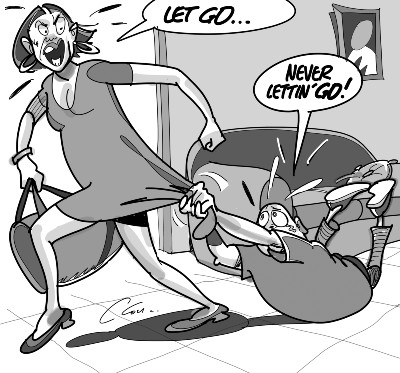 Unfortunately this often ends violently, as one party refuses to accept that the relationship has ended, the party’s over.

This applies to men and women, but the men do seem to have a penchant for violence because they refuse to let go.

There is something about clinging, hanging on, never letting go that must be a singularly human characteristic.  I say human because animals certainly do not exhibit this condition. All mothers love their offspring desperately, and yet in the animal kingdom, the mothers know when to let go, sever the navel string.

Even after the mother bird has reared her chicks after they emerged from the eggs, at some point, she literally kicks those fledglings out of the nest to fend for themselves.

That is the only way that they will grow. But not so with many human mothers who cling to their children, especially their sons, extending an invisible womb and an everlasting umbilical cord, long after the child has turned into an adult.

Some of these mothers cannot let go and have their grown sons still living with them way up into their forties.

Young ladies, take my advice, if you meet such a man, a man in his thirties still living with his mother, beat a hasty retreat, for that relationship with that man-boy will be going nowhere.

But let’s jump to other types of relationships where people refuse to let go. In many instances the writing has been on the wall for a very long time. So much so that it’s etched on the faces of the couple, or at least on one of them, written in stone, embossed and burnished on the souls of the aggrieved party.

“How you look so sad and miserable all the time? If it’s not working leave the man.” “I just can’t let go.” Even though the person is hurting and suffering from the emotional poison that they are subjected to, they still refuse to let go.

“Why do you stay with her even though she treats you like crap?” “I can’t help it, I just can’t let go.”  That’s when the couple is ambling along with the illusory semblance of a healthy relationship and refuses to let go of each other. When it gets dangerous though, is when one party decides to end it, and the other refuses to sign those emotional release papers.

In many cases the man refuses to accept that it has ended and that she doesn’t want him anymore. That can turn deadly.

They refuse to let go of a relationship that she no longer wants and really bring a literary meaning to the term, ‘Til death do us part.’

It’s a temporary insanity, a crime of passion that the French have in their legal lexicon. Whatever it is, there are men who simply refuse to let go, and women who get involved with them have literally signed their death warrant.  “Do you take this man to love honour and obey until death do you part?” “Er, whose death, mine?”

Should you show strength and fight to hold on, or be deemed weak when you walk away? Some think holding on is strong, but sometimes it is letting go.

Never letting go can have deadly consequences, but sadly it’s nothing new, as people, mostly men have exhibited an adhesion to women who have left them that no glue can match.

In extreme cases it’s the crime cliché of ‘a love triangle gone bad,’ or a ‘murder suicide’ because he couldn’t deal with the breakup. If you love something set it free, if it comes back it’s yours, if it doesn’t, hunt it down and kill it. That is the mantra of many men who are incapable of letting go.