I recently saw a documentary about the perils and pitfalls of online dating and the desperate women who got entangled in the quagmire that defied logic and common sense. 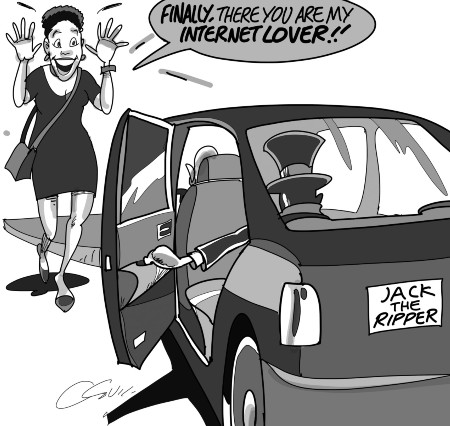 Women from all walks of society put their trust in men who they do not know, and by extension, their very lives. Is it because of loneliness, the need to connect with someone else, the desire to be loved, why people will hook up with a complete stranger, all because he presents a good profile of himself on the internet?

Is it desperation born out of lack of love or simply the modern way of meeting people? Actually it’s not a new phenomenon, for it was Shakespeare who penned, “This is the very ecstasy of love, who’s violent property fordoes itself, and leads the will to desperate undertakings, as oft as any passion under heaven, that does afflict our nature.”

See, the pursuit of love can lead to desperate undertakings, and the internet only makes it more accessible, feeding this desperation at the click of a mouse.

Back in the day people would meet at social gatherings, church, on the job or even at school where friendships blossom into romance. There they created and maintained a contact through letters, giving rise to the term love letters.

When was the last time that you wrote a love letter, or received one?

‘Dear John, oh how I hate to write

I must let you know tonight

That my love for you has gone

There’s no reason to go on,

For tonight I wed another, Dear John.’

That song was written by Pat Boone about a soldier who was overseas and his fiancée found another man. No man wants to receive a Dear John letter. But in this modern era where everything is electronic, at the click of the mouse, a Whatsapp message or text, a new relationship can be terminated or initiated from women who are seeking love.

The documentary I mentioned highlighted this. In the beginning of the feature, the producers created a fake man who most women would find appealing. This fake man, complete with photograph, would link up with these women and make his pitch, exchanging pleasantries, leading up to an encounter

Nine out of ten women who linked this man online agreed to meet him in person at a place of his choosing. They also agreed to be picked up by someone that the man sent for them when he says that he’s tied up in a meeting and would send a car to pick her up. She gladly, willingly, naively, agrees to get into that vehicle with a complete stranger and drive off into the unknown.

Incredibly, when the producers of the documentary revealed the charade to the ladies, most of them said that they saw nothing wrong with their actions.

Almost half of what people portray about themselves on the internet is nothing but lies, embellishments, half truths and guile. Women and men too, will post fake photographs and false profiles .

Men fall for the ruse also, for women will put up their fake profiles, meet the man, then bilk him of his money.

Why are people so desperate for love that they will put good judgement on the back burner and risk getting burnt by strangers on the internet?

One woman said that it was her way of meeting new people, and she actually surfs these dating sites on a regular basis. This has been exacerbated by the lockdown restrictions caused by the pandemic. “After over two years of isolation, I just have to meet someone new.”

Others seek companionship, friendship, love, a serious relationship, even marriage, and put their faith and trust in what they hope to find on the internet. But as someone said, “The internet is like the modern day devil who comes with his sweet words and spins his lies.”

People yearn for companionship, have a great need to be involved in a relationship, but the fly in the ointment, is desperation, heightened even more when it’s carried out on the internet.