Men, fathers, husbands, usually don’t get any ratings, so it’s good that some people, albeit a minority, decided to shed some light on the harried, harangued husbands who suffer in silence. As one guy said when he learnt of Happy Husbands Day, celebrated earlier this year, “Happy husband, that must be the biggest oxymoron of all time.” 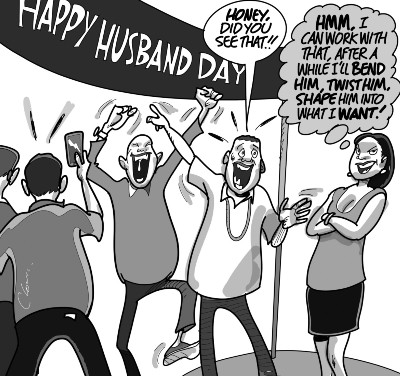 My research revealed that Husband Appreciation Day is not a new celebration, but goes way back in time. Since the earliest recordings of marriage, husbands across countries and religions traditionally have been established as the protector and provider of their wives and families. The role of the husband has traditionally been one of honor.

“After marriage, husband and wife become two sides of a coin, they just can’t face each other, but they’re still together.” Al Gore

“I had some words with my wife, and she had some paragraphs with me.” Bill Clinton

“When you are in love, wonders happen, but once you get married, you wonder what happened.” Steve Jobs

There’s even a raft of jokes about husbands. A son proudly told his dad that he was selected to play the part of a husband in a school drama. The father angrily berated him and said, “Idiot, why didn’t you ask for a role with a speaking part?”

In today’s world, where so many women have come into their own via education, wealth, good fortune or just plain good luck, they flex their power, and men seem to diminish in their eyes.

For many women a husband is merely a means to an end, and some women’s meanness never ends. Don’t get me wrong, all aren’t like that, but many are just out to get what they can from the man.

It seems as if the man is duty bound to make his woman happy, and many men go out of their way to achieve this. But it’s an exercise in futility. As I’ve heard countless men say, “Nothing I do ever pleases her, and I can’t do enough to satisfy her.”

The woman’s duty on the other hand, is to mold and change the man to suit her needs. It’s akin to a potter taking a lump of clay and working it until she gets what she wants. Then she places the finished product in a corner and boasts silently, “See, that is what I created.” Many thoroughbred stallions have been relegated to being docile farm horses, fit only to be attached to a plow or a cart. Broken.

Even feared boxer Mike Tyson, once the baddest man on the planet, had this to say, “Wife inspires us to do great things, then prevents us from achieving them.”

There is a fundamental difference in the approach of a husband as opposed to a wife when they venture into marriage. The man sees what he wants and makes a commitment. He doesn’t look for or expect a change in his bride.

The woman on the other hand, sees what she thinks is a good potential and thinks, “Hmm, I can work with that, after a while I’ll bend, him, twist him, shape in into what I want.”

Fans of Star Trek will remember the words of the alien race, the Borg, who always said this when they invaded other territories, “We are Borg, resistance is futile.” But guess what, some husbands still flail around, struggle in the coils of domination, talk plenty, and as the research that I read stated, ‘act just like a split AC unit, very loud on the outside of the house, but designed to remain silent indoors.’

Listen, it’s not all bad, for many husbands really do enjoy their married life and the lifestyle that it brings.

What is also true though, is that many do not, and are resigned to their fate, eventually accepting their lot in life.