Haiti’s Race Against the Clock

PORT AU PRINCE, Haiti – Haiti is currently making global headlines for all the wrong reasons; it is experiencing a multi-dimensional crisis including an upsurge in violence, a lack of fuel which is crippling many key services and the August earthquake which killed around 2,200 people and left hundreds of thousands in need. 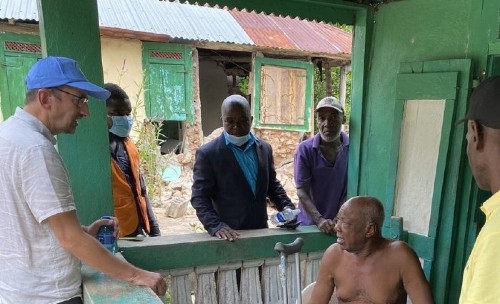 Bruno Lemarquis (left) the UN’s Resident and Humanitarian Coordinator in Haiti talks to people affected by the earthquake in south-west Haiti. (© UN Haiti/Jonathan Boulet-Groulx)As the UN Resident and Humanitarian Coordinator and DSRSG, I am committed, with the UN Team in Haiti, not only to support responses to immediate crises, particularly humanitarian, but also to ensure that the United Nations is fully engaged on the development agenda, on advancing the implementation of the SDGs and in addressing the deep structural causes, which are behind the instability, development and governance deficits of Haiti.

As far as the humanitarian situation is concerned, the UN estimated earlier this year that 40 per cent of Haiti’s population of around 11.5 million, was in need of humanitarian assistance, due mainly to high levels of food insecurity.

The earthquake on 14 August impacted mainly the south of the country but has had devastating consequences and has worsened an already dire humanitarian situation.

Whilst needs remain high among Haitians, the country is experiencing growing insecurity that not only creates new humanitarian needs but also hampers access and the reconstruction and recovery response.

Since June, gang violence in the Port-au-Prince area displaced at least 19,000 people and has affected 1.5 million.

The violence, looting, road blockades, the persistent presence of armed gangs and the resulting lack of fuel all pose obstacles to humanitarian access and the reconstruction and recovery effort.

The repatriation of Haitian migrants in large numbers over the last weeks, is making the already challenging situation, even more complex.

Some 11,000 migrants have been returned to Haiti, including around 8,000 from the US alone. Most of the migrants, report having spent a number of years living in South or Central America. In addition, more recent migrants who had left Haiti following the August earthquake are also being repatriated from neighboring countries.

UN agencies, in particular IOM, are working in close coordination with the Haitian authorities to ensure that their return takes place in dignity, despite overstretched capacities.

The humanitarian response, around two and a half months after the earthquake is now entering into a new phase and there are a number of top priorities that represent what I call ‘races against the clock’ challenges which, if unaddressed, could have further negative consequences. The UN is working hand-in-hand with our national partners to address them.

Children’s education has suffered greatly. Over 1,200 school buildings were damaged or destroyed. The reopening of schools is a top priority, to avoid further school dropout. UNICEF is hard at work, with partners, to support the Ministry of Education in meeting the challenge.

Smallholder farmers who have lost their land, crops, and livestock need support so they do not miss the forthcoming planting season. The UN (FAO and WFP in particular) are working with partners in this regard. This will help to limit already high levels of food insecurity.

Displaced people are being helped by the International Organization for Migration and other partners to return home where practicable – to avoid further urban migration in particular.

And the provision of basic social services, in particular health services, needs to resume as fast as possible, to avoid, for example, disruption to medical treatments and vaccination programs.

WHO/PAHO, UNICEF and UNFPA are actively working with the Ministry of Health and other partners in this regard.

National leadership for the response

All this has happened under the strong leadership of Haiti’s authorities as well as local authorities and partners against a backdrop of challenging logistics, insecurity, and access issues.

One of the key lessons learnt from the even more devastating 2010 earthquake in Haiti was the need to support and respect national leadership, national coordination arrangements, and local institutions, to rely on Haiti’s capacity, expertise, and knowledge in order to ensure sustainable change.

There has also been a greater focus on supporting the local economy and ensuring coherence between the short-term emergency response and longer-term solutions.

The Government launched a post-disaster needs assessment immediately following the earthquake, with collective support from the UN (with UNDP as technical lead) and other partners, in particular the European Union, World Bank and Inter-American Development Bank.

The recovery plan which will cost about $2 billion will be presented at an international conference called by the Government, with UN support, and scheduled to take place in mid-December.

The event will raise awareness and mobilize resources for the recovery and reconstruction phase, and it’s hoped international donors will come together to support and advocate for Haiti’s long-term development.

Alongside emergency response and emergency development work, the UN integrated team in Haiti (UN Country Team and UN political mission) is seeking to focus its collective political and programmatic resources on some of the key structural causes of instability and development and governance deficits, including the fight against corruption, impunity, and the transformation and modernization of the economy.

It is also seeking to support the operationalization of public policies that benefit the most vulnerable, for example in the areas of social protection, food security and disaster risk reduction.

In this way, the nexus between humanitarian, development and peace efforts can be advanced.

If we do not meet these challenges together and do not invest in recovery, reconstruction, sustainable development and addressing roots causes, it will be harder for Haiti to get out of this cycle of humanitarian crises and instability.

Without this support, the people of Haiti will continue to suffer and this will become a crisis forgotten by the world.”

*Bruno Lemarquis is the UN’s Deputy Special Representative of the Secretary-General (DSRSG), and Resident and Humanitarian Coordinator in Haiti. He’s been talking to UN News about the earthquake response and reconstruction process.