These times are ominous, and who knows what the days in the future will bring? We as humans have a history of planning ahead, preparing for the future, and yet we do so with blind faith and hope, for nothing is guaranteed. 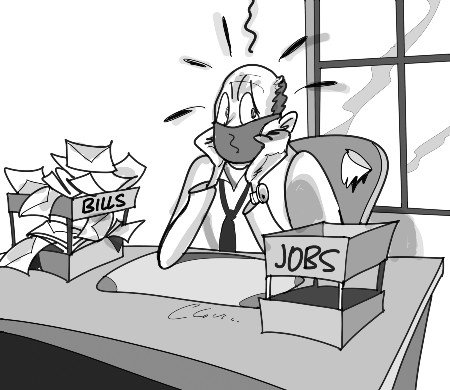 No matter how carefully a project is planned, something may still go wrong with it. Nothing in the future is promised to anyone. This can range from a simple thing such as planning an event and rain falls and washes it out, to making arrangements for a huge soiree and sickness intervenes.

Sporting events often fall prey to the vagaries of the weather. “Oh my, the match washed out again.” But at least those events can be rescheduled, postponed for another day, or contingency plans can be made.

Or it can be of something of an even more personal scale, such as a wedding where rain again, comes and washes it out or the bride fails to show up.

And even when we are meticulous, crossing every T and dotting every I, things still often go wrong. There is the saying, ‘The fog of war,’ used by the military to highlight that even after all the strategic planning has been done, nothing is certain to go as planned when the bombs start exploding and the bullets start flying.

With the onset of this virus, many plans have been shattered. Little did we know a few months ago that we would all be falling prey to something that we can’t even see.

It came like a thief in the night and in one fell swoop, wiped out the plans of the entire World. One great event that eclipsed all others in sports, the Olympics, was postponed for a year. Again, the best laid plans of men, erased. The Olympics was only cancelled before during World Wars 1 and 2.

This time it has been postponed until July of next year, disappointing many. But we just have to work with the bigger programme. Nothing is written in stone.

All the great sporting leagues around the World were halted. soccer, baseball, basketball, hockey, swimming, American football and more, all erased from the blueprint of our lives. Billions of dollars, lost. But as they say, it’s only money. The joy that sport brings is worth so much more.

But it’s not all about sports, other plans have been made that have gone to naught. Large funerals were planned, only to be attended by a chosen few. Weddings also were affected, which we all know take a lot of planning Many have been reduced in size or cancelled.

Still, when plans change, it’s not always bad, for other opportunities can arise, dark cloud, silver lining and all that. For example, a smaller, simpler wedding will be much cheaper, and a scaled down funeral will save people spending so much on liquor and food to impress ‘mourners.’

When plans are disrupted it can be most disappointing and hurt to the core. It can affect financially too, as that planned project or job is no more, and income suffers. No jobs coming in, no tips to get from customers, no functions to prepare.

But where there’s a will there’s a way, and where there is life there is hope, and as wise persons said, “Life is what happens to us while we are making other plans.” We are all living through a tumultuous time in the World’s existence and it’s new to all of us. But mankind will survive. Our only hope is that we can learn collectively from this challenge, that we do not run this planet, but nature does, and whatever dreams that may have crashed, planning for the future is not futile.