COP26 Was Not a Roaring Success, But Let’s Not Write it Off Just Yet

BELMOPAN, Belize – Ahead of COP26, (The United Nationals Climate Change Conference) there was a sense of urgency and expectation that had not been felt previously. 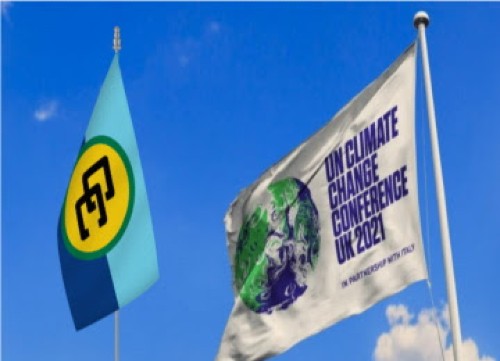 Having been postponed in 2020 due to the pandemic, the negotiations that were set to take place in Glasgow were not just overdue, they were crucial. Island and vulnerable nations have been on the frontlines of the climate crisis for decades, and as the impacts worsen, the cost of inaction is not just measured in dollars, but also in human lives.

When reports emerged in the lead up to COP that there was a deepening mistrust between developed and developing nations over climate finance and related actions, many were bracing for the worst.

The official pre-COP event in Milan highlighted that the rumblings that had been heard throughout the year were serious. This, in addition to the mixed results at the G20 summit that quickly took place between Milan and Glasgow set the scene for a tense two-week stretch of negotiations.

Led by Barbados Prime Minister Mia Mottley’s viral speech during the opening days of COP26, Small Island Developing States (SIDS) and vulnerable nations took center-stage. Climate finance and accountability, which had been the elephant in the room at pre-COP and the G20, was addressed directly on the first day of the summit – and dictated the tone for the following days.

From the Indian Ocean to the Pacific and Caribbean, leaders spoke out about the issues facing their communities as a result of the climate crisis, and the lack of action or accountability from developed nations.

Two key issues were central to the discourse: the US$100 billion in climate finance that was meant to be provided to vulnerable nations every year from 2009 to aid in climate mitigation and adaptation, but that had not materialized; and the financial compensation that was supposed to be dispensed to countries experiencing loss and damage due to climate change.

Both international agreements had fallen short of their purview, and developed nations solutions for these issues prior to COP26, had not been received successfully. A clearer picture emerged during the summit.

The US$100 billion pledge is now set to be reached by 2023. Loss and damage proved to be too contentious an issue, and no progress, other than the first mention of loss and damage, was made in negotiations. While this may seem like a poor outcome for island nations and vulnerable communities, there is a silver lining.

Where the public sector and global governments were slow to commit, the private sector and philanthropists have seemed to pick up the slack. Evident in the creation of the Glasgow Financial Alliance for Net Zero (GFANZ), a platform that unites 450 global companies worth US$130 trillion that are seeking to fund the transition to net-zero, or the Jeff Bezos Earth Fund’s US$10 billion commitment to environmental conservation.

As Justine Lucas, the Executive Director of the Clara Lionel Foundation explained in the Caribbean Climate-Smart Accelerator’s (CCSA) recent virtual event, “There’s a role for philanthropy for climate action – governments have a role to play but philanthropy can help in the development.

Donors want to see an end goal, a sense of change for climate change in the region,” she continues, “we need to engage in collaborative financing and mobilize these finances to the Caribbean. It is possible to engage in trust based philanthropy for climate resilience.”

Although public finance was not as forthcoming at COP26 as hoped, the private sector has rapidly been shifting towards more environmental investment and sustainable development. While diplomacy takes time, businesses and philanthropists find themselves less tethered to red-tape.

Net-zero goals are embraced by companies as much as governments, and financing local resiliency or climate action programs is not just an investment in mitigation or adaptation, but also improving the community’s resilience. Across SIDS and vulnerable nations, the private sector and local communities are not waiting on international aid – they are working towards their own solutions, and finding opportunities to implement them.

Programs like the Resilience Scorecard are highlighting how local innovation can potentially have a widespread effect on the region and the world at large.

“The idea behind the scorecard is that we really wanted something that each Caribbean island can use to set baselines for their goals, evaluate resilience barriers, bring alignment to certain planning initiatives and really demonstrate leadership and focus on how these issues can be addressed,” notes Advanced Energy Group’s (AEG) Kimberly Lewis of the newly-launched scorecard,

“The goal was to have one country use the scorecard within 12 months, at the moment we have 5.” Innovation and resilience-building is happening locally, with or without the climate financing promised, but having it – whether now or in 2023 – will still be welcomed.

Labelling COP26 as a failure is not a fair assessment of the summit. There was progress made, such as recommending the reduction of fossil fuel subsidies and stopping the financing of overseas coal plants.

There were compromises, namely the current commitments that take us to 2.4°C rather than the 1.5°C necessary to minimize the extent of the destruction already being experienced, and the climate finance promised to vulnerable nations. Of course, there were some failures – loss and damage sticks out prominently, as does the lack of tracking of pledges, which the UN has now committed to undertake with greater rigor, however late.

Overall though, progress was made. Are we better off than before the Glasgow summit? Yes. Could it be better? Spectacularly so, but as the UK’s Lead Climate Negotiator Archie Young put it, “Imagine bringing together 197 friends and getting them all to agree on where to go to lunch.”

Let us not forget that these summits are every year. COP27 will be held in just under a year in Egypt and delegates will once again take stock of the progress made during 2022 and negotiate new agreements.

Change is incremental and does not happen overnight, and even if it seems as though there is a lack of action on the global stage, you can look to your local communities to see that there are solutions being developed and opportunities available. Putting issues of accessibility and climate justice aside, the world is actively working towards improving the future.

What we need are more people like you willing to take a stand and make a difference.

* Racquel Moses, is the chief executive officer at The Caribbean Climate-Smart Accelerator.