Campaign Blitz Pays Off for Crist

Miami Springs, FL - The opening of the Miami-Dade campaign office for Charlie Crist was welcomed with cheers. It‘s been a while since a gubernatorial candidate has opened headquarters anywhere. The Miami Springs office is one of three around the state that was packed with supporters excited about the campaign to beat Governor Ron DeSantis. 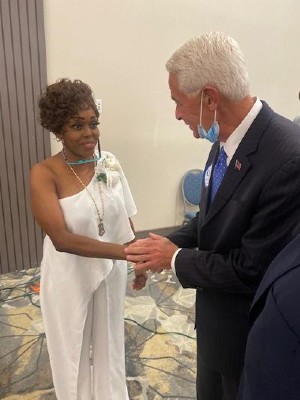 Charlie Crist joins Tangela Sears at the Parents of Murdered Children dinner in Miami. Sears is the founder of the Florida organization. Her son was killed in Tallahassee.The former governor lives up to his reputation as a campaign master doing up to five counties or city stops in a few days. It's a sure bet that he will visit a Black business, barbershop, grocery store, organization, or advocacy group at nearly every stop. "He might be the last nice guy left in politics," says Gadsden County Commissioner Brenda Holt, a powerhouse in Florida's only predominantly Black County. Holt says the community wants the former Governor to bring equality to the equation in Florida. "I'm a former schoolteacher and I'm concerned that we can’t tell the truth about Black history. Black history is American history. Even the courts say we’re being targeted. The governor has eliminated a woman’s right to choose, Al Lawson’s congressional district, and it’s harder to vote. We died of COVID at a higher rate than anybody else and we were ignored," Holt says.

Being kind doesn’t cost anything but being cruel does, according to Crist. “I’m campaigning hard to let people know I believe in a Florida for all. I also know we’ve got to beat this guy. His administration has been a nightmare. He’s a bully and just a bad guy. All people need to be treated with respect and decency.”

While DeSantis’ controversial mandates are particularly disturbing to Blacks, apparently other Floridians are weary of the dictates according to respected Republican pollster Tony Fabrizio. His recent poll has Crist leading DeSantis by a point and another GOP poll has Crist by 2.

Crist’s has an extraordinary name recognition of 92% and high positive numbers. That enviable status does not stop him from reaching out to Floridians, a sharp contrast to Governor Ron DeSantis.