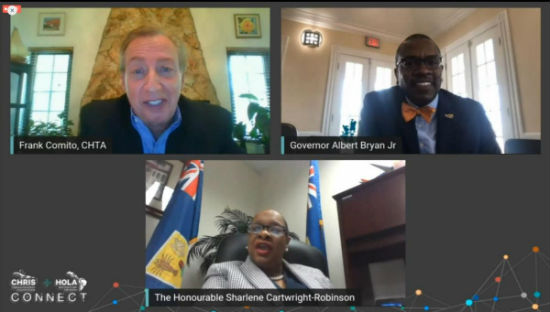 The “Views from Heads of Government” session, which also featured Turks and Caicos Islands Premier Sharlene Cartwright-Robinson, and was moderated by Frank Comito, CEO and Director General of the Caribbean Hotel and Tourism Association, addressed how the two island communities are coping with the global travel and tourism downturn caused by the Coronavirus Disease 2019 (COVID-19) pandemic.

On June 1, the USVI became one of the first Caribbean destinations to reopen to leisure visitors, though it had to put that reopening on pause on August 19 after recording a spike in COVID-19 cases. Leisure travel to the Territory will resume again on September 19, with all travelers five years and older being required to present a COVID-19 test result.

Such strict containment measures have helped the USVI mitigate the spread of the novel coronavirus. Governor Bryan noted the Territory was one of the first places in the United States to proclaim “no mask, no service.”

Despite the challenges of the pandemic, Governor Bryan is hopeful for tourism’s eventual rebound, pointing out that the USVI is still “seeing tremendous tourism numbers.”

He noted how quickly airlift picked up again when the Territory reopened, and pointed out significant increase in activity in the charter yacht industry. And while September is typically a slow month for the hospitality industry, this year there’s been an uptick in people planning trips.

“I see light at the end of the tunnel on this,” he said, explaining that key to the Territory’s management of the pandemic has been the symbiotic relationship between the public and private sectors.

While cases within the Territory have remained relatively low overall, vigilance is still crucial due to limited resources to handle a major outbreak in the community.

Virgin Islanders, too, have played an essential role in mitigating the spread of the virus. Residents have been cooperative in following COVID-19 protocols, such as wearing masks and social distancing.

The Governor said he’s “really impressed” with the vast majority of residents, especially because having to keep your distance from people and avoid affectionate greetings is a difficult cultural adjustment for the USVI and the Caribbean as a whole. “[It’s an] amazing social shift that has happened because we are a hugging, kissing place. We love people in the Caribbean.”

Still recovering from the twin hurricanes of 2017, Irma and Maria, the Territory’s efforts to rebuild and regain footing are now dovetailing with its pandemic management strategies.

Governor Bryan noted that, as a U.S. territory, the USVI has benefited greatly from federal support, adding that he wasn’t sure how the Territory would have coped without it.

Ongoing economic initiatives to get the USVI back on track include the addition of a new section to the Hotel Development Act, developed in response to the hurricanes, that allows hotels to add up to 7.5 percent more tax that can go toward refurbishing existing properties or rebuilding them altogether.

Improving the Territory’s power infrastructure continues apace, with about 60 percent of the replacement of poles from wood to composite complete. Next year, underground projects will start, with the goal of getting most of the Territory’s grid underground to harden it against future storms.

Governor Bryan is urging the United States to implement a strict COVID-19 testing policy on all its travelers so that destinations in the Caribbean region can safely reopen their doors.

When islands are open for business, it has a ripple effect on other destinations, especially in the cruise industry, Governor Bryan explained. He also noted that ensuring Puerto Rico – a major travel hub for the region – remains a stable tourism entity is critical for the industry, particularly in the rest of the Eastern Caribbean.

“I just want people to come to the Caribbean so that we all can benefit from it,” he said, “because you see one island, you want to see more.”