ST.CROIX - The U.S. Virgin Islands Department of Tourism has launched a distinctive brand for the island of St. Croix. 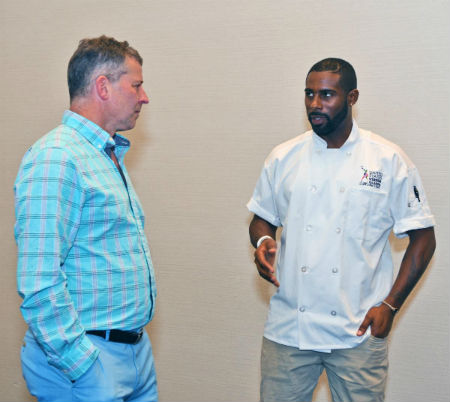 Chef Lamar Bough of St. Croix (right) chats with freelance journalist Robert Curley at Caribbean Travel Marketplace in The Bahamas on Thursday. Chef Lamar served up a tasty Crucian breakfast for travel writers and agents. Dubbed "St. Croix: a vibe like no other", the new brand for "The Big Island" was launched last week at a Crucian press breakfast at the Caribbean Hotel and Tourism Association's Caribbean Travel Marketplace in Nassau, Bahamas.

"We believe that St. Croix is going to be the big new attraction for tourism in the Caribbean," said United States Virgin Islands Commissioner of Tourism Joseph Boschulte, who said the people, cuisine, history and culture of the destination, coupled with its laid-back vibe, will help position St. Croix as a "go-to" Caribbean destination throughout a new marketing campaign.

The Commissioner explained that the marketing campaign is designed to strengthen demand for the island and features several influential personalities from the St. Croix community as the main voices. One of them, talented Crucian chef Lamar Bough, was on hand at the launch where he served the media delicious breakfast offerings, including saltfish gundy; Virgin Islands benye; chicharrones with pickled onions; and tomato, cucumber and avocado salad.

"Through the eyes, art and expertise of Crucians we can present the breadth and depth of experiences the island has to offer. Through chefs, mixologists, musicians, tour guides, artisans and other professionals we will explore the Crucian vibe," the Commissioner explained, adding "I am excited to roll out our marketing strategy to position St. Croix as a destination with its own identity and one whose tourism potential is limitless."

The Department launched the campaign with a focus on digital and social media, including Spotify and Pandora, as well as Facebook, Instagram and Twitter. Print and broadcast will launch in late February and early March, respectively.

St. Thomas and St. John will continue to be promoted under the overarching United States Virgin Islands banner.

Commissioner Boschulte reported that on the heels of a successful 2019/2020 Crucian Christmas Festival, which attracted visitors from around the world, the island of St. Croix is poised for a strong tourism performance this year. 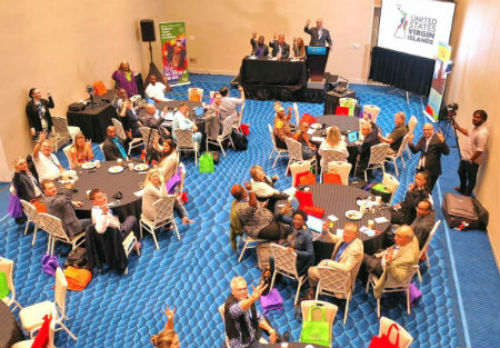 Journalists and travel professionals were in a U.S. Virgin Islands frame of mind at the press breakfast.

He reported that 2019 saw an increase of 7.9 percent in visitor arrivals by air to St. Croix over 2018, and he is optimistic that with refreshed accommodations coming back online in the months ahead, the island would see more positive trends in 2020.

"With Divi Carina Bay Resort & Casino reopening, the Renaissance St. Croix Carambola Beach Resort & Spa undergoing a major refurbishment, the continued growth of the sharing economy, and the oil refinery preparing to deliver fuel supplies this year, St. Croix will no doubt be a preferred destination on the radars of leisure and business travelers," said Commissioner Boschulte.

"After the hurricanes of 2017, impacted islands saw major dips in arrivals with reduced accommodations inventory. However, two years later, airline capacity on St. Croix is actually ahead of pre-storm levels; with continued hard work and focus, we expect that trend to continue," the Commissioner asserted.

This summer, St. Croix will welcome a third American Airlines daily flight from Miami between June 4, 2020, and August 17, 2020. The carrier also recently extended Charlotte-St. Croix flights from Saturday-only to daily during the peak Christmas period.

Travelers to St. Croix can look forward to upcoming events such as the Agriculture and Food Fair (February); the St. Patrick's Day Parade (March); and Taste of St. Croix and the St. Croix Food & Wine Experience, both of which happen in April.