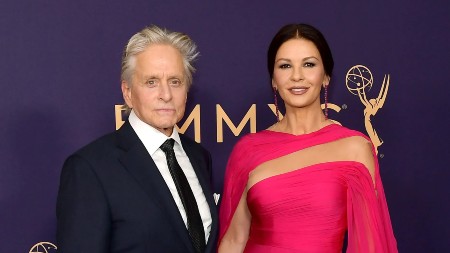 Actor Michael Douglas and his wife, actress Catherine Zeta-Jones. (Photo by Matt Winkelmeyer/Getty Images)Burt, who is also Tourism Minister, described the shot in the arm for a struggling sector, once the main plank of the island’s economy, as “excellent news”.

Earlier this week, the Royal Gazette newspaper reported that Douglas, Ariel Sands’ owner, had teamed up with Slovakian real estate developer JTRE to redevelop the 13.8-acre site into a five-star resort.

Douglas, 77, whose mother was Bermudian, said he and his 52-year-old Welsh actress wife Catherine Zeta-Jones, who still own a home on the island, were excited by the opportunity to work with JTRE on the “rejuvenation” of the resort.

But said that in the last few weeks he has had the opportunity to meet the developers who shared their plans and he was pleased to signal to them the support of the government of Bermuda.

“This is a strong vote of confidence in our tourism marketability and this level of investor confidence demonstrates that Bermuda remains a viable tourism product. The island’s economic recovery will be strengthened by the renewal of our tourism economy.

“Our efforts are now trained on working with the developers to realize their plans for the site and ensuring that Bermudians are provided with firm opportunities for employment and career development in the various phases of this development.”

The chief executive officer of the Bermuda Hotel Association, Stephen Todd, said “It’s especially heartening to eventually welcome a new property to the island and also an increase in our overall hotel room inventory, which is much needed at this juncture.

“It’s really great news to know that we’ve got a developer that’s looking at that site and hopefully we will see it come to fruition in the next couple of years.”

Todd welcomed the input from overseas, adding :it clearly states, in our mind, that Bermuda is seen as a very desirable destination”

“The development plans for Ariel Sands will add much needed beds to Bermuda’s hotel inventory.”

Ariel Sands hotel and cottage colony closed in January 2008 and the site was later cleared in anticipation of redevelopment. Despite several plans for the location over the past 10 years, including interest from the Hilton hotel group, none ever got off the ground.

Douglas is the son of the late Hollywood legend Kirk Douglas and Bermudian actress Diana Dill, who died in 2015. The Dill family’s history in Bermuda dates back to 1630.

The family owned the Ariel Sands property in the 1840s and it opened as a resort in 1954.