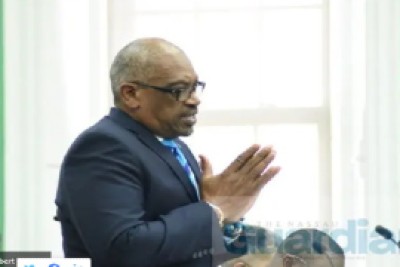 Prime Minister Dr. Hubert MinnisMinnis told Parliament that to understand the scale of this investment, the original investment and other investments to date in the Shipyard have totaled approximately US$250 million dollars.

“This new investment will match this and exceed it by US$100 million,” he said.

The government said that the proposed infrastructure works will replace the two damaged docks with larger docks and Minnis said that the new docks will be capable of handling and servicing the largest ships in the world.

He said once the expansion is completed, the shipyard will be the largest civilian shipyard in the Americas.

Prime Minister Minnis said the new investment will result in a notable increase in employment and economic activity on Grand Bahama and for local businesses throughout Freeport and the rest of the island.

“The government and the owners of the shipyard will work on a new partnership agreement that benefits the people of Grand Bahama,” he said, adding that the expansion works on the Grand Bahama Shipyard will begin as early as October this year.

He is promising more details on the project in the near future adding “this is a sign of progress, a sign of hope and a sign of confidence.

““Grand Bahama, like the entire Bahamas, is on the way back. This is one of the biggest investments in Grand Bahama in its history.”

Prime Minister Minnis said that international investors are confident about the country’s prospects,  pointing to a number of approved projects on New Providence, Grand Bahama and the Family Islands.

The US$37 million redevelopment of Sandals Royal Bahamian on Cable Beach has already started, with a projected timeline for completion of early November this year.

When the resort opens, it is expected to engage 1,000 workers.

The well-known, 12-room Rock House Hotel and Restaurant on Harbour Island, Eleuthera is set to re-open under new ownership on 15 November 2021 and will employ 30 Bahamians. The US$75 million Aqualina condominium project was recently approved by the Government.

Aqualina will be located adjacent to the Baha Mar resort and will comprise 27 large three- and four-bedroom residences, each with an ocean view. At peak construction approximately 300 Bahamians will be employed. Aqualina is scheduled for completion in 2023.

On Grand Bahama, the government has approved the new US$100 million Discovery Bay Project, which includes a boutique hotel and restaurant, residential estate lots, townhouses, bungalows and marina.