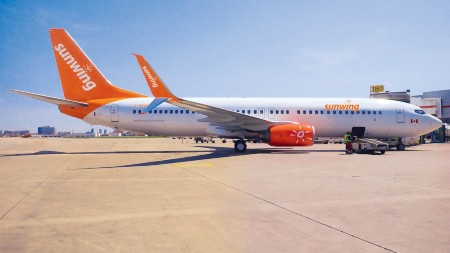 In making the recent announcement, the ministry Tourism, Investments and Aviation said that Sunwing – that is also the largest integrated travel company in North America, will be return to The Bahamas after a two-year absence.

Following the inaugural flight, more flights will come each Saturday from both Toronto and Montreal.

Deputy Prime Minister Chester Cooper, who is also the Minister of Tourism, Investments and Aviation, welcomed the resurgence of Grand Bahama as a major tourist destination.

He said that the airline’s return to Grand Bahama Island this holiday season speaks to the viability of the product.

“Airlift and stopover visitors are critical to the economy of Grand Bahama and this will provide a much-needed boost for the tourism economy,” Cooper said.

“With our plans to redevelop the airport after Hurricane Dorian ravaged it, and the transformation of the Grand Lucayan Resort, we believe the potential for Grand Bahama really is limitless.”

The Minister of Grand Bahama,  Ginger Moxey also welcomed business back to the island after the pandemic.

“Sunwing’s return is a welcome development for Grand Bahama Island. This service is indicative of the growth of the tourism sector and signals a major step in Grand Bahama’s recovery and revitalization,”  Moxey said.

She added that industry partners should look forward to more news about Grand Bahama in short order that supports confidence of an imminent turnaround.

“Visitors will get to explore and experience our island and its diverse offerings and send a distinct message to the world that Grand Bahama is indeed open for business and better than ever. We remain open to strategic partnerships and collaboration,” she said.

Sunwing, that is based in Toronto offers direct service from airports across Canada to destinations across the United States, Caribbean, Mexico and Central America.