GEORGE TOWN, Cayman Islands – St. Lucia’s Deputy Prime Minister Dr. Ernest Hilaire says the island is celebrating its tourism performance as travel resumes following the COVID-19 pandemic that forced the closure of the borders of the island and other Caribbean destinations. 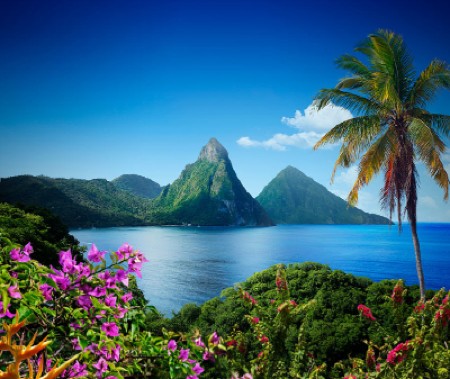 Image courtesy of the St. Lucia Tourism AuthorityHilaire said the island is reporting record numbers, in the absence of pre-pandemic levels of regional travel.

“I have one thing to say about our international tourism presently. It’s a simple description: St. Lucia is soaring,” said Hilaire, who is also the Minister of Tourism.

He told Caribbean Tourism Organization's (CTO) “Destination Media Briefing”  taking place here as part of activities for the CTO Business Meetings and Caribbean Aviation Day Event, that so far this year, St. Lucia has seen record-breaking visitor arrivals, the return of events and a significant number of tourism developments.

He said that in July, St. Lucia recorded its most outstanding post-pandemic performance with the highest arrivals ever from the United States.

“We surpassed 2019 levels for five out of the seven months from January through to July, with our final August figures expected to be similarly strong.

“The UK was eager to return to St. Lucia. The UK arrivals surpassed 2019 levels in March and April and was shy of July 2019 arrivals by just two percent. These arrival figures are significant because they illustrate that tourism in St. Lucia is not pulling back. It is indeed soaring.”

The minister said that airlift to the destination has been “exceptional, reflecting the airlines’ confidence in the recovery of our island.

Hilaire noted that this is the case despite the fact that LIAT, which was the main regional carrier, no longer services most of its former destinations, including St. Lucia.

“And of course you know regional travel, since the demise of LIAT, has been rock bottom. So it shows how exceptional we are doing with airlift from outside the region once again since 2019 was a record-breaking year this signals that our airlift is extremely strong and better than it was in 2019.”

The minister said that St. Lucia continued to work closely with airlines to increase the frequency of flights from it key feeder markets and also to introduce airlift from new cities.

Hilaire said that the destination has not resumed the engagement of tourism rangers, as had been proposed a few years ago to respond to security challenges.

“… it is something that we thought long and hard about… We’ve decided to go the soft way first and we’re going to launch a major public service education campaign throughout the country, educating St. Lucians about the importance of tourism, reminding them that they are hosts when visitors come to the country.”

Hilaire said the hope is that together with the work the destination is doing with community tourism, it can sensitize “our people as to how they can best protect the industry, and how they can really elevate the sense of welcome that we have in the Caribbean as a whole but we believe in St. Lucia in particular, and to see how we can deal with the issues that we had face from a different angle rather than have more police or security people out there in the communities, on the beaches.”

He said the thinking is to try “to change and adjust the mindset of people who may have become a little cynical of tourism, and not as welcoming as we are renowned for”.

He said he had seen some of the preliminary material that forms part of the campaign.

“I think we will launch a very exciting program, sensitizing St. Lucians and encouraging them to be even better hosts than they are.

“And we believe that will work better. And especially, like I said, community tourism because the visitors’ vacation space is our living space. And we want to share it with them. So we believe rather than force the issue, let us do differently, let’s get people to be even more welcoming, and to be protectors of that space to allow visitors to have the most enjoyable experience.”