Willemstad, Curaçao - Sandals Resorts marked its venture into the vibrant culture and colors of the Dutch Caribbean with an enchanting Grand Opening Celebration at Sandals Royal Curaçao headlined by the island’s most captivating performers – including the highly anticipated return of Carnival to the destination for the first time in three years. Brilliantly bringing to life the newly opened resort’s tagline, Where Amazing Comes Together, the weekend’s events began on Friday, June 24th, with a welcome by Sandals Resorts’ Executive Chairman, Adam Stewart, followed by the sounds of the Kachu horn as the sun set over the resort company’s new home in Curaçao. 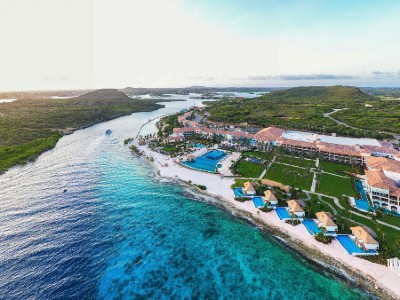 Arial view of the new Sandals Royal Curacao resort. (Image courtesy of Sandals International Resorts)“Curacao’s rich history and vibrant culture is something to be discovered and we can’t wait to share Sandals Royal Curaçao with the world,” said Stewart. “This extraordinary new resort sends a signal about the reimagined return of Caribbean travel and the ingenuity our guests can come to expect from Sandals Resorts.”

Reinforcing its commitment to its new community, the celebration – attended by a spirited crowd of resort guests, local dignitaries, island partners and international press – was headlined by various Curaçaon talent who form the tapestry of the island’s pulsing arts culture. A performance by one of the most innovative pannists in the Caribbean, Russell “Konkie” Halmeyer, along with the 7-band formation, The Guayaberas, welcomed attendees with the iconic beat of the steel pan drums, as Sway Performers swooned guests from a towering 20 feet in the air all throughout the evening.

Tunes by Caribbean music producer extraordinaire, DJ Menasa, were met by the iconic sound of Nelson Braveheart’s saxophone, setting the stage for a countdown to a celebratory sunset ceremony at precisely 7:01pm, commemorated by local Curaçao horn blowers, Adriaan Leesly and Sharlon Kopra, and cultural performers from Folkloriko Ambiente Kultural. The fiery hues of the sunset were brought to life by the Phoenix Curaçao Theatrical Fire Show, mesmerizing the audience with spectacular dance choreography and elaborate costumes.

Mashups between local drummers, DJs, and violinists CJ Opus and Clari Montero, stirred the senses and ignited the soul, as guests mingled among lit teepee lounges and a signature cocktail bar representative of the local Divi tree. The event space was speckled by the work of talented Curaçao street chalk artist Wendy Nieuwkerk, who replicated the Netherlands’ signature Delft Blue tile art.

Making a true splash, Curaçao’s Swordfish Synchronized Swimming Team came together for a first-of-its-kind combination routine inside the bi-level Dos Awa Infinity Pool, the centerpiece of the resort. All active members of Curaçao’s national junior team, five swimmers from three group categories – solo, duet and team – performed together for the first time, a milestone in itself for the international competitors.

Bringing in the Blue

A nod to Curaçao’s quintessential spirit, Blue Curaçao, the global entertainment phenomenon, Blue Man Group, took to the stage to headline the evening, complete with its iconic characters and award-winning theatrical production. Energizing the crowd with their signature paint drum spectacle, Stewart joined the group for a Sandals-themed stunt on the stage.

The performance was followed by a riveting, operatic number by the ever graceful Jasmin van Eeden in sync with a fireworks extravaganza by Gustavo Semeleer of the Curaçao Professional Fireworks Display 3D, lighting up the night sky.

The Return of Carnival to Curaçao

A coveted island-wide celebration, Carnival made its grand return to Curaçao for the very first time since 2019, choreographed by the award-winning Dushi Aventura with a kaleidoscopic, parade of close to 100 drummers, dancers, stilt walkers and iconic front line costumes, all handmade especially for Sandals Royal Curaçao’s grand opening. An appearance by Raynor “Raey” Lauffer, known as the Tumba King, authenticated the performance as an official event of Carnival with his winning Tumba song. In true Carnival fashion, the parade was followed by the dynamic brass band, Percussion Creative Dynasty.

A Disco, Decades in the Making

A beachside after party with decadent desserts and bedazzling disco performances –  a nod to the resort company’s four decade Anniversary – capped off an illustrious evening to remember. Headlined by Grammy Award-winning producer, remixer, DJ, and composer Tracy Young, the late-night celebration was flanked by special acts and music through the decades, with guests dancing on the sand late into the evening.

Over the weekend, Executive Chairman Adam Stewart was joined by special guest and iconic fashion designer Stan Herman, to unveil the new “Anniversary Collection” Team Member uniforms curated by Herman exclusively for Sandals’ newest all-inclusive resort in Curaçao. Stewart shared insight into this coveted collaboration as a means to commemorate this milestone year for the brand, and as a tribute to the 15,000 Team Members who have been part of this journey with Sandals Resorts for 40 years and counting.

Debuting first at Sandals Royal Curaçao and thereafter throughout all resorts in the portfolio, the inaugural collection was inspired by the island’s iconic colors, architecture and landscapes, with Herman designing the uniforms for a wide range of categories.

“This weekend is a celebration of the charming and captivating island of Curaçao, its endearing, lively, and talented people, and our magnificent Team Members who make this all possible,” said Stewart. “We are incredibly excited to give you a glimpse into the future of Sandals Resorts and how we will continue to bring forward tremendous growth to the Caribbean region.”