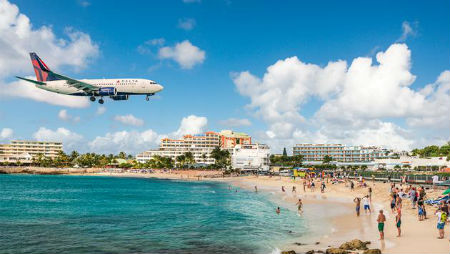 Flights are returning to Jamaica.The nation closed its doors to travelers in March to counter the spread of the virus. But that effort, though recognized early as successful by several outside observers, also meant cutting off visitors and nationals from entering.That cost the country heavily in areas such as tourism revenue, the economic lifeblood of the Caribbean nation.

However, starting June 1, Jamaicans overseas were allowed to return to their homeland. By June 15, the country also opened its doors to visitors.

Everyone entering the island, however, is now required to follow precautionary government protocols, including submitting online information prior to leaving for Jamaica and subjecting themselves to COVID-19 testing before and/or on arrival in the island, plus possible quarantine. The government also warned that travel to Jamaica may be barred if the protocols are not followed.

“The travel authorization is not required to book your flight to Jamaica,” explained Prime Minister Andrew Holness last month. “It is, however, a requirement at check-in and boarding, and the airlines will not allow passengers to board without presenting their travel authorization.”

The move to re-open was welcomed by the tourism industry, which employs 130,000 Jamaicans locally and impacts another 120,000 in various industries.

“Tourism is the lifeblood of our local economy, and with the help of international experts and a dedicated task force, we have developed protocols that allow us to safely re-open our borders,” Donovan White, Jamaica’s director of tourism, noted in recent press release from the Jamaica Tourist Board (JTB).

According to White, Jamaica’s re-opening should come without major hitches in the tourism industry and the nation’s residents are ready to ensure that is so.

“We are confident that as we re-start our economy, Jamaicans will work together to ensure a safe, secure and seamless experience for our tourism workers, their families and visitors, while preserving the authentic experiences travelers seek when they visit our shores,” he said.

The Jamaican government said it has co-operated with various international institutions to ensure the protocols preserve the health in the country. Among those are other governments in the Caribbean and partners such as the World Travel & Tourism Council, Centers for Disease Control and Prevention, World Bank, PriceWaterhouseCoopers and development finance banks.

Despite re-opening optimism and safety precautions, Jamaica is still expected to suffer massive loss of revenues due to the absence of tourists, especially those from North America and Europe, who traditionally visit the island, especially during the winter months which overlapped the shutdown.

At least 20,000 had reportedly applied for entry to Jamaica through mid-June since the online procedure began in April.At least 500 - Jamaicans and visitors - reportedly landed in the island from the United States on June 15, more than 5,000 by the end of the month.

However, reports indicated that 14 people - all traveling from the U.S. - tested positive for COVID-19 in one 24 hour period after the island’s re-opening.

There were also mounting stories about frustrations at Jamaica’s ports of entry as travelers were subjected to lengthy delays caused by COVID testing and obtaining results. When the U.S. reported a massive surge of COVID-19 infections late last month, the Jamaica government was forced to alter its protocols.

Starting July 1, Holness explained, U.S. residents - from so-called COVID-19 hotspot states such as Arizona, Florida, New York and Texas - who want to enter Jamaica on July 10 or after will be required to test for the virus before arriving or they may not be allowed entry. Non-residents of Jamaica will be required to upload test results for Jamaica government access before they travel.

“As of July 10, persons visiting Jamaica from the declared high-risk areas will be required to present their PCR test,” Holness explained during a June 29 virtual press conference, as the volume - and pressure - to process visitors mounted.

It’s not clear, however, if the regular flow of travelers will still go to Jamaica in the coming months.The U.S. had recorded more than 2.5 million infections by the end of June, with some 130,000 deaths.

Meanwhile, many Jamaicans have expressed caution over leaving their American homes due to the still lingering threat of COVID-19.

However, some Jamaican nationals who normally return home believe it is worthwhile to continue that tradition.

Jamaica, up to press time, had recorded close to 700 infections and about a dozen deaths. That’s mild when compared to places like the U.S. Jamaica’s efforts to contain COVID19, which has infected more than 10 million and killed over 500,000 worldwide, has been viewed as admirable.

Yet COVID-19 or not, Jamaicans openly admit they feel comfortable in the Caribbean island they still call “yard”, especially since the virus is having more damaging impact in places like the U.S.

“They just look at it like the U.S. has so many cases of COVID-19. So they’d like to be in their home space in Jamaica. People are trying to go home.”

Jamaica appears willing to welcome them.