HAMILTON, Bermuda — Bermuda tourism officials had double reason to celebrate over the weekend — the opening of a new luxury hotel in St George’s and the arrival of the first cruise ship in more than a year. 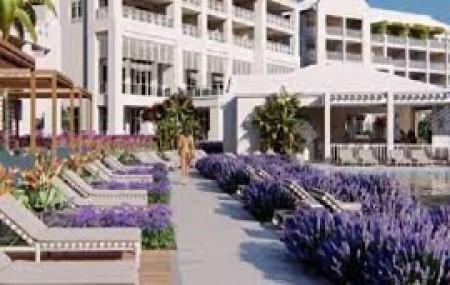 St. Regis Bermuda (File Photo)As the St Regis Bermuda welcomed its first guests after a ribbon-cutting ceremony, the Viking Orion anchored off Dockyard in what was hailed as a landmark moment in the island’s recovery from the coronavirus pandemic.

Premier David Burt, who is also Tourism Minister, said the opening of the St Regis was “another major step forward in the start of the tourism renaissance” and something that would bring much needed activity to St George’s at the island’s east end.

Miguel Purroy, a representative of the hotel’s owners, said the St Regis opened on time and on budget and he was confident the final product would make Bermuda´s tourism industry proud.

He added that it was hoped the hotel “contributes to place Bermuda as the luxury destination we all dream of”.

The oceanside hotel, which has a newly renovated golf course, will include 120 guest rooms and suites alongside a luxury residential development with a range of two- and three-bedroom condominiums with views looking over Gates Bay.

Ground-breaking for the hotel on a site that had lain empty for almost 30 years took place in 2017 — during the previous One Bermuda Alliance administration’s one term in office — after a number of attempts to build a new hotel had failed to get off the ground.

Once a Holiday Inn, the hotel later became a Loews property before Club Med took it over. It closed in 1988 and 20 years later was demolished by implosion.

Although Royal Caribbean International has cancelled plans to homeport its Vision of the Seas ship in Bermuda for seven-night cruises to the Bahamas, Viking Ocean Cruises has gone ahead with its Bermuda homeporting plan.

Acting Transport Minister Walter Roban hailed the Viking Orion’s arrival as a watershed in the battle back to normality from COVID-19, which has battered the island’s already struggling economy.

“The sight of a cruise ship returning to our shores brings with it the promise of much- needed economic activity.

“Many sectors depend on business from cruise passengers and crew and through the successful realization of homeporting for Bermuda, the government has taken another important step to get Bermudians back to work,” Roban added.

The Orion will stay at anchor until crew quarantining is completed on Thursday.  The ship will sail from Bermuda on a series of eight-day cruises from June 15 and will also call at Hamilton, St George’s and Dockyard, the island’s three ports, but with half its normal 900-passenger capacity.

The cruises are scheduled to end on August 3, but the government hopes the program will be successful enough to get an extension.