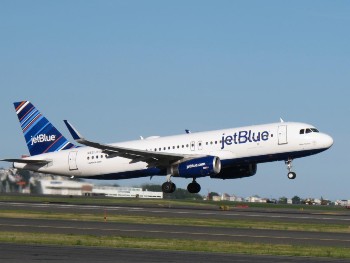 JetBlue will take off from New Jersey to St. Thomas this summer.JetBlue announced the new flights, which go on sale on February 23, will operate four times a week, beginning July 1, 2021.

According to the airline, the new service is a result of a new Northeast Alliance with American Airlines, which will see JetBlue add more than a dozen new markets in greater New York City with new destinations offered from both LaGuardia Airport (LGA) and EWR.

The routes, which include Newark to St. Thomas, help to strengthen JetBlue’s position as a dominant airline player in the New York market.

JetBlue and American Airlines recently announced the launch of the first phase of their new alliance, aimed at bringing customers more competitive choices in New York and Boston. The two airlines are introducing 33 new routes as part of the initial phase.

This spring, members of JetBlue’s TrueBlue and American’s AAdvantage loyalty programs will be able to enjoy reciprocal benefits, starting with the ability to earn points or miles on either carrier, enhancing the value of both programs.

“The northeast United States market is critically important to our tourism sector and our Virgin Islands communities in the Diaspora,” said Joseph Boschulte, Commissioner of Tourism for the U.S. Virgin Islands, who welcomed the new flights ahead of an expected busy summer travel season.

The Commissioner affirmed demand for the U.S. Virgin Islands continues to be strong as airlines introduce new service and increase their flight frequency.