Guyanese Nationals No Longer Need Visas to Travel to the UK

GEORGETOWN, Guyana –Britain Tuesday announced that Guyanese nationals would no longer require visas to travel to the United Kingdom as of November 9 as the two countries deepen the trade and other relations. 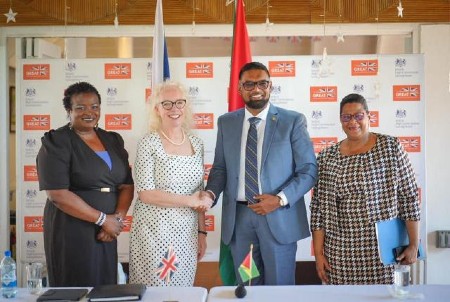 “This visa lift is a real sign of the confidence that the UK has in the growth of our relationship and, together with the direct flight, at the end of March with British Airways, we believe that this change is going to be transformative to our already strong relationship,” said United Kingdom High Commissioner Jane Miller.

Miller, flanked by President Irfaan Ali, told reporters that the visa lift would be fillip for Guyanese businesses to “explore further opportunities”.

The British diplomat said that Guyana nationals would no longer need visas for up to six months. However, those who would like to stay much longer, work or study would need a visa.

She said that there would be no special security measures for Guyanese entering the United Kingdom.

“There is no additional screening for Guyanese,” she said with British Embassy officials indicating that that immigration was still expected to ask the reasons for entering the UK.

President Ali told reporters that while London has indicated that there would be no special security screening for Guyanese, he is urging nationals not to abuse the process, noting that a lot of hard work had gone into the United Kingdom agreeing to the decision.

“Today, I am very pleased that Guyanese can travel with greater ease to the UK. However, I want to say to all Guyanese that with these waivers come an important responsibility to all of us. We have a responsibility to safeguard these decisions and they come with hard work and they take a long time and we’ll be working very closely with the UK in strengthening our systems to ensure there is proper monitoring and to ensure that there is no abuse of the system,”  Ali said.

President Ali said the Advanced Passenger Information System would be used to screen passengers like travelers from any other country, in addition to real time information sharing and monitoring, noting that with an increase in demand for Guyanese citizenship, Guyana is working to ensure that its system “is not abused.”

Ali had raised the need for visa-free travel to the UK, as a “priority issue” in a meeting with then British Prime Minister Boris Johnson and he reiterated on Tuesday that the new initiative “comes with very hard work too”

The diplomat said that there would be no special security measures for Guyanese entering the United Kingdom.

“There is no additional screening for Guyanese,” she said with British Embassy officials indicating that that immigration was still expected to ask the reasons for entering the UK.