GEORGETOWN, Guyana – Guyana's government on Wednesday welcomed the announcement that the UK-based carrier, British Airways, would commence flight to the country next year. 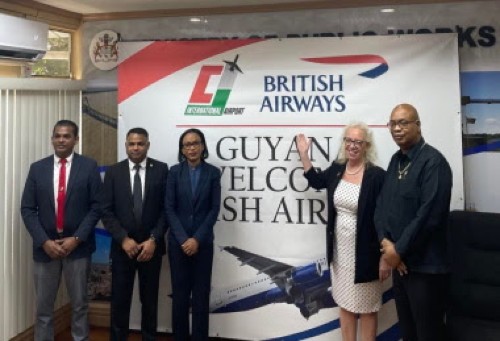 From left: Chief Executive Officer (CEO) of the Cheddi Jagan International Airport, Ramesh Ghir; Ministry of Public Works, Deodat Indar; Minister of Tourism, Industry and Commerce Oneidge Walrond; Minister of Public Works, Bishop Juan Edghill and British High Commissioner to Guyana, Jane Miller.“British Airways is a word renowned airline and is the UK’s primary flag carrier and its service is of great standard,” said Public Works Minister, Juan Edghill, adding that is a “proud and exciting day” for Guyana as the airline is expected to begin servicing the route from March next year.

“British Airways is the new carrier to enter the Guyana market (and) starting today August 10 tickets go on sale. Today’s announcement and the start of selling of tickets is to ensure adequate lead time and a proper roll-out of this service,” he told a news conference.

The airline will ply the Guyana route twice weekly through a connection via the Caribbean island of St. Lucia using a Boeing 777-200ER aircraft catering for 332 passengers.

Tourism, Industry and Commerce Minister, Oneidge Walrond said that the new service will be of benefit to the over 30,000 Guyanese living in the United Kingdom in addition to visitors.

“When we engaged the diaspora in the UK, that was something that they particularly bemoaned that they cannot have a direct flight from the UK to home,” she said adding that the new service will also service Guyana’s vast tourism industry.

The, British High Commissioner to Guyana, Jane Miller said the arrival of British Airways in Guyana reflects growing confidence globally in Guyana in the tourism industry and as an economic hub for Latin America and the Caribbean.

“There is so much to see here and I think British Airways adding a direct flight shows so much confidence in that. And also in trade, we know that the economy is growing so fast, so it’s a great opportunity for the Europeans to becoming directly to Guyana”, High Commissioner Miller said.

She reminded that Guyana is the UK’s largest trading partner in the Caribbean and the operation of the British Airways service is expected to bolster that partnership.

Minister within the Ministry of Public Works, Deodat Indar said the airline’s entry to the Guyana market has been long overdue and the decision to begin operations to Guyana should be seen as a testament to the eyes of the world now being on Guyana.

He said negotiations with the airline began several months ago and the government is pleased with the decision of British Airways to make Guyana its newest destination.