ROSEAU, Dominica – Dominica’s Tourism Minister, Denise Charles, Monday described as “the best Christmas gift” the decision by American Airlines to introduce daily flights out of the United States to the island next year. 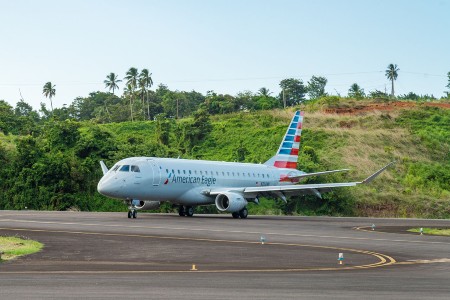 American Airlines plane lands in Dominica. (GIS photo)“It is with the greatest joy I announce that we have received confirmation from our partners, American Airlines that effective April 2022, they shall commence daily flights into Dominica,” Charles said on the state-owned DBS radio.

“We have moved from two flights weekly, we are going to have three in January and now from April, to seven times weekly. This is the best Christmas gift and excellent news for our destination as this will add 28,000 more seats to Dominica,” she added.

Dominica on December 8 welcomed the inaugural American Airlines direct flight from Miami with Prime Minister Roosevelt Skerrit describing the occasion as a “game changer” for the socio-economic future of the Nature Isle.

Skerrit said then the fact that even before commencing operations, American Airlines took the decision to increase scheduled flights into Dominica from twice to three times a week, “is a clear indication to us that the demand is there, and that the efforts that we are making in developing our tourism industry is bearing fruit” hoping in the near future for a daily schedule between Miami and Dominica.

Skerrit said that as international travel continues to recover from the coronavirus (COVID-19) pandemic, it has spurred greater interest and desire for people to commune with the great outdoors, and Dominica as the Nature Isle was seeking to capitalize on the situation.

He said his administration continues to invest in making Dominica an attractive destination, upgrading the facilities here at the Douglas Charles Airport and ensuring that the necessary infrastructure is in place to guarantee passenger safety, and enhanced visitor experience.

She said the flights would be reasonable with a one way ticket now to New York costing US$160 “so one can literally leave Dominica on Wednesday have a long weekend return on Saturday or Monday from January and as I said from April, any day of the week you can have a direct flight to Miami and connect to other destinations”.