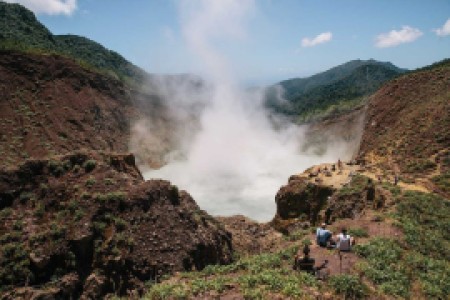 Dominica’s Boiling Lake (Photo courtesy of Discover Dominica)“I am hoping with the hurricane season (due to begin on Wednesday), we have no disasters, no storms, no major hurricanes, we can start actual construction in November of this year,” Tourism Minister Denise Charles said.

She said the US$54 million project involving a length of Detachable Monocable Cable Car 6.6 kilometers long will provide a safe and quick passage to the Boiling Lake, the second-largest of its kind in the world, situated in the Morne Trois Pitons National Park, a World Heritage Site, east of the capital.

The lake is a flooded fumarole from a volcano in the area known as the Valley of Desolation and for which it takes a 6 hour trek.

She said the project is being undertaken by ABL Holdings with the government having a 15 percent stake.

“Currently we are in the first phase. They have done consultation with the people of the Roseau Valley. We are expected to do a second round soon and we are also conducting the feasibility studies including the environmental impact studies for this project and finalizing negotiations with land owners,” she said.

“Things are looking great. This will certainly bring greater economic activity …and as a result you expect to see many more people visit the Boiling Lake. They will need tour operators,” Charles said, adding that the government is hoping that construction of the project will begin later this year.

When completed, Dominica will surpass, Vietnam, which holds the title of the world’s longest cable car with its 5.8 km of the ropeway.