ROSEAU, Dominica – The Dominica government has sought to re-assure citizens that every effort will be made to ensure their safety as the island prepares to welcome its first cruise ship during the coronavirus (COVID-19) pandemic in June. 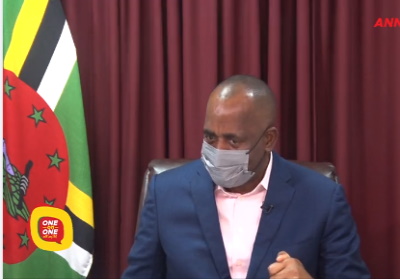 Prime Minister Roosevelt Skerrit speaking on his television programme on Sunday night (CMC Photo)Last week, the chief executive officer of the Dominica Port Authority (DPA), Benoit Bardouille, said that the (DPA) is working to limit the contact cruise ship visitors will have with the local population. Dominica last Friday reported that it had no cases or deaths linked to the virus and that the 175 cases registered since the first case was detected in March last year, have all recovered.

Speaking on his weekly television program on Sunday night, Prime Minister Roosevelt Skerrit said while he understood the concerns of the citizens, it was also important for Dominica to re-open its economy.

“I am aware of you r misgivings my dear friends about our decision to welcome cruise visitors in June. The first ship I am told is schedule to arrive in Dominica on June 6.

“Yes, this comes with inherent risks, but we have to recognize the need for us to get back to a state of normalcy and therefore we have not taken this decision lightly, “Skerrit said.

He said the authorities have been in consultation with the cruise lines and regional counterparts “and also within the stakeholder framework in Dominica.

‘We are developing a number of protocols and a range of other guidelines that will ensure the safety of all involved. Before passengers are able to embark on their cruise journey they will have to be cleared.

“The specifics of the protocols will be explained over the next month by the relevant authority. I wish to assure you though that as a government we are committed to a safe medium between maintaining the health of the nation and the need to return to economic activity,” Skerrit said.

Bardouille said that there will be a new health screening area on the pier, in order to screen persons disembarking and that “only persons who are going on pre-sold tours will be allowed out.

“In the past people could walk off the ship and go into the city and move on their own journeys. Now you will not be able to do that,” Bardouille said, adding that until “the all clear” is given by the health authorities here, people will be allowed to come off the vessels.

Skerrit praised the performance of front-line health workers in the fight against the pandemic here as the island recorded no new cases of the virus.

“We can now proudly say that we currently have no active cases of COVID-19. We are down to zero, we have been looking for this zero number for some time now and we thank God for this. This is no small feat; it is a resounding indication of the hard work of Dominica’s healthcare workers and the structured management approach we have taken to this crisis since we recorded our first case back in March of 2020.

“It is an opportunity to once again highlight the yeoman efforts of our frontline workers…we have all played our part to keep our numbers low and the results of this commitment are clear. We have been successful also due to our very transparent protocols and guidelines which we put in place to protect every citizen and resident. I am truly proud of all our efforts as a nation and very significantly thank God we have had no deaths,” Skerrit said.