Dominica, with a new brand and tourism outlook, is aiming to differentiate itself from the neighboring Dominican Republic. 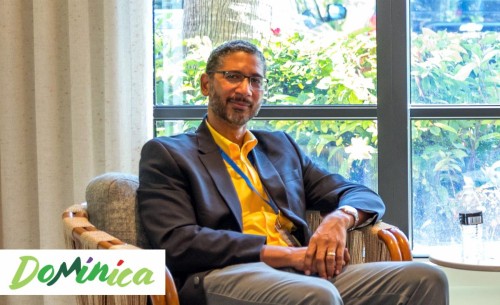 Colin Piper, CEO, Discover Dominica AuthorityWith the launch of its new brand and logo earlier this year, tourism officials from the Caribbean’s “Nature Island” are focusing their marketing efforts on promoting five pillars – Adventure, Agrotourism/Cuisine, Health and Wellness, Aqua/Water Adventure, and Events and Entertainment – to establish a bolder identity for the island, minimize confusion in the marketplace between the two destinations, and illustrate the island’s rich attributes.

Addressing the fourth estate during last week’s Caribbean Tourism Organization (CTO)’s Destination Media Briefings in the Cayman Islands, Colin Piper, CEO of Discover Dominica Authority, said “the elephant in the room is the Dominican Republic, the same name with much more resources to spend. And so every time Dominica goes out to advertise, people think it’s the republic. And so we have to be novel, we have to be creative in the way that we go out and market and make sure we tell a story that resonates with people.”

A key destination initiative is the signing of an agreement for the construction of a new international airport with an anticipated completion date in 2025. The facility will be built on 411 acres of land near the existing Douglas-Charles airport.

Property updates for the island include the soft opening of Coulibri Ridge Eco-Resort in December 2021; Secret Bay’s plans to expand from 12 villas to 42 by 2025; and Fort Young Hotel & Dive Center’s plan to grow from 41 rooms to 101 by mid-2023. In 2023-24, anticipated new properties coming online will be Anichi Resort & Spa, Autograph Collection, and Tranquility Beach Resort, Curio Collection by Hilton.

Describing a visit to Dominica as akin to visiting an “outdoor gym and spa”, Piper also touted the importance of culture in Dominica, which is celebrated in many ways, including Carnival, Jazz ‘n Creole, and the ever-popular World Creole Music Festival, taking place October 28-30, 2022.

Piper reported that the island, which is served by nonstop American Airlines flights from Miami, has largely recovered from the devastation caused by Hurricane Maria in 2017 and stayover visitor arrivals to the island are on track with projections for 2022, with the U.S. being the primary source market, followed by intra-regional Caribbean travelers.

“As a people, as a country, as a destination, we’re moving on and we’re more about the future than we are about the past,” he said.