Curaçao Based Jetair Begins Service to Suriname With Weekly Flights

PARAMARIBO, Suriname – Curaçao-based airline Jetair Caribbean is now servicing Suriname with a weekly flight that could increase depending on demand, officials said. 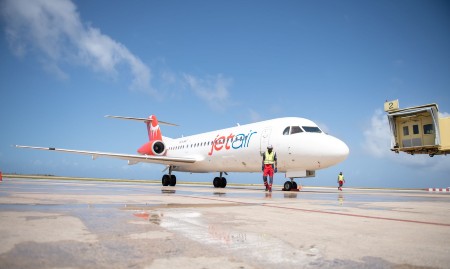 Image via the Curaçao Tourist BoardWhen the first direct flight between Willemstad-Paramaribo arrived at Johan Adolf Pengel International Airport here this week, Minister of Transport, Communication and Tourism Albert Jubithana said it was a “historic moment”.

He said the additional airlift was a plus for the island’s tourism sector and would ensure Suriname can benefit from more business and leisure air traffic.

Jubithana said it would also assist government in reaching its goal of making Suriname a hub – a strategic starting point to reach most destinations within and outside the Caribbean Community (CARICOM) region.

“Curaçao is the destination of choice and given the relationship between Suriname and Curaçao goes back far into the past, we have chosen to create a flight route here,” Jetair CEO Robert Maas said.

“Our friends and relatives in Suriname and Curaçao can now see each other by boarding a plane and reaching their destination after three hours.”

The airline’s managing director Antonio Ribeiro, who offered a promise that the carrier would be on time, said he anticipated that both countries would benefit from the new service.

Ribeiro said Suriname had indicated it had difficulty establishing connections with other countries and it was because of this that Jetair sought to obtain permission to fly to the Dutch-speaking nation.

“We have understood…that this connection to the island is very welcome and we are responding to this with a flight once a week. If there is a need for more, we can expand,” he said.

Jetair, which began operating in the Caribbean in 2018, currently services other routes between Jamaica, Sint Maarten and Barbados, among others.

Their inaugural flight to Suriname came as Caribbean Airlines resumed regular flights to the country after more than two years.

In March 2020, flights from Trinidad and Tobago to Suriname were discontinued due to the COVID-19 pandemic.