BRIDGETOWN, Barbados – Panamanian carrier Copa Airlines touched down at the Grantley Adams International Airport on Wednesday, after a two-year hiatus, with an almost 80 per cent load factor. 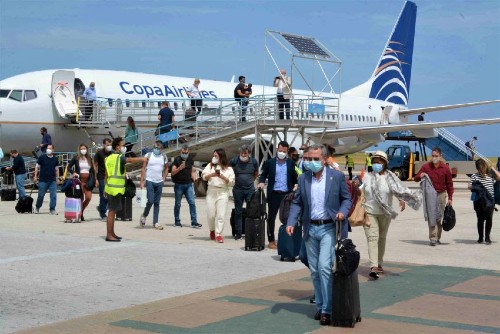 Passengers arriving on Copa Airlines as it returned to Barbados.Barbados Tourism Marketing Inc.’s (BTMI), Director of Latin America and the Caribbean, Corey Garrett, who arrived on the flight, said the return of the airline came after “some very deep intense discussions” with Copa representatives.

He spoke about the significance and benefits of the airline returning to Barbados.

“Latin America is one of our closest continental neighbors and at the same time provides a perfect opportunity to continue to grow the portfolio of tourism marketing for destination Barbados, in that particular market. We understand what the focus is; we understand the market, and we understand the airline that we are working with.

“We have landed a bigger plane than we landed in 2018 and that also now provides further opportunities for destination Barbados, and of course our neighbor Panama to work from a more commercial or investment standpoint…. We now have a cargo hold where we can increase the exportation between Barbados and Panama, and of course, create many more commercial linkages as we work deeply to even grow the leisure tourism business,” Garrett explained.

He also noted that with the return of Copa Airlines, people in Latin America, North, Central and South America would have access to Barbados, and as such, the country could pursue not only leisure tourism, but also “high net worth individuals”, investors, and those who wish to hold meetings, incentives, conferences, and events.

Garrett also shared that the BTMI would continue to promote and position Barbados, “the gem of the Caribbean Sea”, as the number one viable destination to visit in the Caribbean.

The flight, which consisted of nine crew members, two of them, Barbadian Captains Chetwyn Clarke and Marc Holford, and 131 passengers, including 15 media personnel, was welcomed by stilt walkers and live pan music. The media personnel, who are from Latin America, will be on the island for three days to learn about and experience all that Barbados has to offer.

The two local pilots received an extra welcome as they were greeted by their family members – Captain Clarke by his wife, Lisa, and son, Liam, as well as his mother, Beverley, while Captain Holford was greeted by his mother, Marva.

Captain Clarke shared that piloting the return flight was a special occasion for him.

“It’s always been a dream to fly something this large into Barbados and I’d like to thank the BTMI and everyone involved for making that dream come true,” he said.

Copa Airlines, a subsidiary of Copa Holdings, first started flying to the island on July 17, 2018. The carrier will facilitate two direct flights weekly from Panama on Wednesdays and Saturdays.