Three Caribbean destinations – Martinique, Cuba and Honduras’ Cayos Cochinos – have been named to the New York Times’ popular “52 Places to Go” list for 2023. 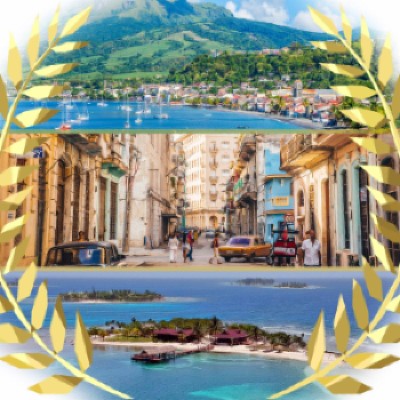 Of the French department Martinique, ranked 16, journalist Elaine Glusac wrote that while travel was frozen in 2020, Martinique celebrated the induction of its traditional yole sailboat on the UNESCO Intangible Cultural Heritage List. The island was also named a UNESCO Biosphere Reserve, recognizing the destination’s commitment to sustainable economic and social development. “Islanders are awaiting yet another decision from UNESCO, which they hope will name the nearly 4,600-foot volcano Mount Pelée and the Pitons du Carbet range to the World Heritage List,” Glusac noted.

Writer Lauren Prestileo said that while Cuba, ranked 27, often feels out of reach, it sits close to the United States and has become more accessible with travel restrictions relaxed by the Biden administration. “Cuba’s people are as generous with their stories — of history, family, even politics and protest — as they are with their music, an omnipresent, joyful soundtrack thrumming through the island’s cities and towns. Less than two years after historic protests were met with harsh repression, and as the country rebuilds from Hurricane Ian, travel to Cuba and support of its people may never be more valuable,” she stated.

At number 33 on the list, off the northern coast of Honduras and within the Caribbean Sea is the Cayos Cochinos archipelago. Home to approximately 200 Indigenous Garifuna residents, Cayos Cochinos is part of a marine preserve and features two main islands along with smaller cays spread over 300,000 acres. “Between scuba dives and hikes to see pink boa constrictors and black-chested spiny-tailed iguanas, travelers can volunteer to propagate new coral or count sea turtles. Travel to the islands, which are roadless and free of cars, also supports the Garifuna community, which offers guide services, restaurants and tastings of the local root-infused spirit, guifiti,” Glusac described.

As lovers of the Caribbean, we should all feel a sense of pride in this significant recognition of our friends and neighbors in the region, which should augur well for increased awareness and visitation. If we truly buy in to the notion of Caribbean “oneness”, let’s celebrate each other’s victories in the same way we step forward with aid and assistance when natural or other disasters strike our shores.