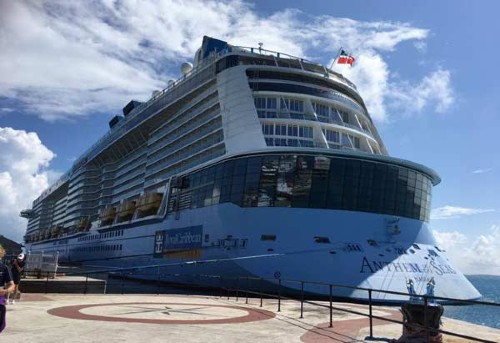 He said the government would soon publish the first draft of next year’s cruise ship schedule, which could feature as many as 222 calls.

Scott said the figure was a “testament to Bermuda’s relationship with our cruise line partners” even though eight visits were earlier cancelled because of stringent COVID-19 testing protocols. The government has since announced the protocols, including a controversial travel authorization form (TAF), will soon end.

“Now that Bermuda has opened up with COVID-19 testing ending as of October 25, Bermuda is even more attractive and the forecast 2023 cruise ship numbers speak for themselves,” he said.

“January 2023 has eight calls, February has three calls, and March has 13 calls scheduled. Bermuda has done a stellar job this year thanks to all of our stakeholders and their tireless work,” Scott said.

Scott said that it is now expected the island will have 166 visits with 15 visits having been cancelled – eight due to the COVID-19 testing policies, six owing to weather and one because of the sale of the Viking Sun.

The minister said that Bermuda had already welcomed 310,587 cruise ship passengers this year, injecting an estimated US$131.5 million into the local economy.

In 2018, 180 cruise ship visits were scheduled, and 193 were scheduled in 2019, although due to cancellations the number of actual visits recorded were 171 and 184 respectively.

It was expected that 2020 would be a banner year for cruise ship visits with 196 calls on the schedule, but the global pandemic devastated the industry, resulting in only four of the calls coming to fruition.

Last month, Celebrity Cruise Line announced it had pulled four stops and Norwegian Cruise Line three in October and November because of “Bermuda’s current testing requirements”, according to the Royal Gazette newspaper.

Opposition politicians and restaurateurs launched renewed attacks on the government over its controversial COVID-19 testing protocols after the two cruise lines cancelled visits.

The government introduced the TAF in July 2020 during the height of the coronavirus pandemic. All visitors have had to take a COVID test just before arrival and submit a TFA along with a US$40 fee — down from the initial US$75 charge. Returning residents also have to pay the US$ the $40.

Premier David Burt earlier said the TAF, which is expected to rake in US$22 million this year, would continue until next March, despite repeated calls by critics for it to be scrapped as it was bad for business.