ST. JOHN’S, Antigua – Antigua and Barbuda has entered into a formal agreement with the Nigeria-based Marvelous Mike Press Limited, for the launch of Antigua Airways that is expected to become operational by October this year. 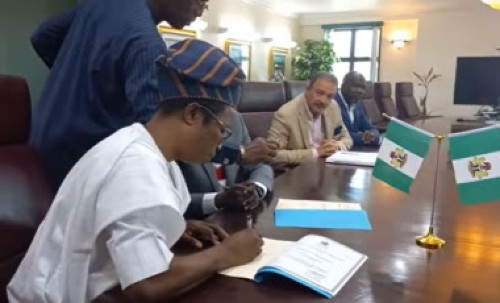 “We have already had commitments from several Caribbean countries, just to include a few…Grenada, St. Lucia, St. Vincent and the Grenadines, Dominica. They have all agreed now to invest in LIAT and to increase the assets so that LIAT can provide inter connectivity for the Caribbean people.

“When people travel from Africa to Antigua, in as much as we welcome them staying here…we will also encourage that they also experience other countries in the Caribbean and LIAT will provide that type of activity,” Browne said.

Under the agreement with Marvelous Mike Press Limited, the Antigua Airways, will be based in Africa and the government will receive a 20 per cent of the profits.

Tourism Minister, Charles Max Fernandez, who witnessed this week’s official signing and said the third week in October is the tentative date for the first flight and that the airline would be having three flights into St. John’s on a weekly basis.

“Initially the idea is that they will have passengers and do their bookings. So if someone is coming from Nigeria, apart from just spending a week or two in Antigua, they will be able to spend a few days in Antigua, a few days in Dominica, come back to Antigua, catch a flight and go out or spend a couple days in one of the other islands,” he said.

“Nigeria alone is 200 million people so that population will be a new source market for Antigua. In addition to that they’ve already spoken to LIAT so linkage between LIAT and the new airline will be very, very important…it also opens the door for investment,” he said, adding “there are a lot of wealthy people in Nigeria”.

Under the agreement, St. John’s will provide limited tax exemptions for the airline’s first five years and provide space for its operations at the airport. The government will also help in the recruitment of qualified crew members, identify hotels for crews, personnel and passengers during stop over visits and grant 10 passports under the Citizenship by Investment Program (CBI) to Antigua Airways.

Under the CBI program, government provides citizenship to foreign investors who make a significant contribution to the socio-economic development of the island.

Marvelous Mike Press Limited chief executive officer, Michael Akinola, said the agreement would benefit Nigerians, who because of many travel restrictions are unable to visit the Caribbean.

“A lot of them have interest but they have to acquire visas to pass through Canada, the United States and to pass through London. So I believe when this airline starts operations all these problems will be put aside,” he added.