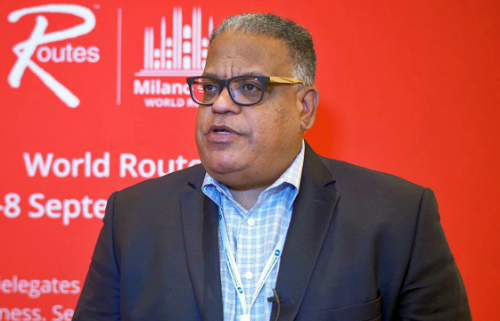 U.S. Virgin Islands Commissioner of Tourism Joseph Boschulte in Indianapolis last weekCommissioner Boschulte, who held bilateral conversations with about a dozen airline executives while in Indianapolis, reported that carriers were upbeat about business to the Territory as he delivered important destination updates to help guide their decisions for the next winter season.

"Load factors this winter are strong," said the Commissioner, who noted that one airline reported completely full loads into the Territory over the past several weeks.

The tourism chief explained that there was particularly strong interest in St. Croix, and he took the opportunity to update partners on the marketing initiatives which leverage the island's new brand "St. Croix: a vibe like no other".

"So it gives us an opportunity to hopefully improve our airlift into St. Croix for the upcoming winter season when we have two major hotels back online with a renewed product - Renaissance St. Croix Carambola Beach Resort & Spa, and Divi Carina Bay Resort & Casino," he added.

Commissioner Boschulte, who also met with Indianapolis-based travel agents and journalists during his visit, noted: "What we do now are the building blocks ... we don't expect to see eight American Airlines jets on St. Croix next winter, but in three years we'd like to see eight AA jets on a Saturday on the island."

Routes Americas, now in its 13th year, is an opportunity for airlines, airports and destinations to come together to discuss new air service agreements.

Dave Appleby, Director - Latin America & the Caribbean for Routes, said that it was absolutely critical for islands such as the U.S. Virgin Islands "to be present, to be able to make those connections, and to be able to really strengthen their case as to why those airlines should be considering them in the future."