ST. GEORGE’S, Grenada – Police have confirmed that several crew members of party boat Harbour Master are in custody following an incident on Wednesday in which world javelin champion Anderson Peters was injured. 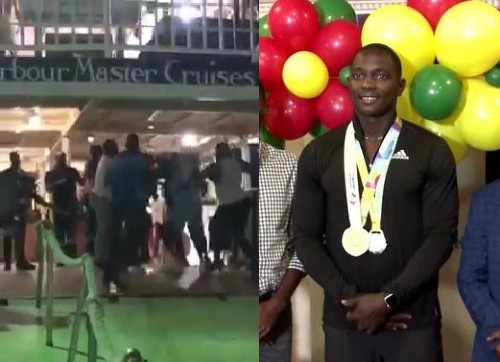 A screenshot (left) of the video in which world javelin champion Anderson Peters (right) was seen being assaulted.And the Grenada Olympic Committee has condemned the “barbaric actions” of the perpetrators of the assault on Peters who returned to the island just the day before to a VIP welcome, after winning the silver medal in the men’s javelin at the 2022 Commonwealth Games in Birmingham, England.

The sportsman was among patrons who were on the boat that was offering its services during the Carnival celebrations.

While police have not yet released official details about the incident, videos circulating on social media show crew members assaulting Peters and then throwing him into the water.

The boat had returned from an early afternoon cruise and was scheduled to conduct a second cruise but that did not occur because of the incident and the detention of the crew members.

In a statement issued on Thursday, the Grenada Olympic Committee said it was “saddened by the news of the cowardly actions of some five persons who physically assaulted our national sporting icon and hero”.

“We have received preliminary information on the incident and understand that our world champion sustained non-life-threatening injuries from the assault meted out [by] these non-nationals.

“The Grenada Olympic Committee joins with all of Grenada in condemning these barbaric actions and look forward to the relevant authorities taking decisive actions against all the perpetrators. We stand ready to lend our support with his recovery and look forward to an expeditious resolution to the matter,” it said.

The opposition New National Party also issued a statement calling for swift justice in the matter.

“We strongly denounce all acts of violence and submit that such should not be tolerated. Grenada is marked by its peaceful nature and without a doubt, we subscribe to the rule of law,” it said.