St. George’s, Grenada W.I. – The 2022 Grenada Rugby World 7s (GRW7s) was officially launched at the destination’s National Stadium recently and it will be the new home of the longest running Club Rugby 7s tournament in the region. 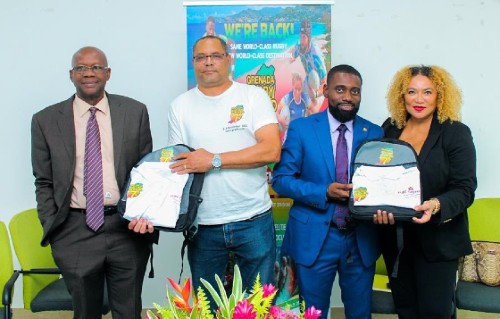 Grenada Tourism Authority CEO, Petra Roach declared, “We are intentionally building out sports tourism as one of our planks of growth so to host this very prestigious tournament is a major win for Grenada. Rugby sevens is one of the most well-distributed forms of rugby, and differs from the traditional rugby union, with teams made up of seven players playing seven-minute halves, instead of 15 players playing the usual 40-minute halves. It is exciting and quick paced and we know that hosting this tournament will also further stimulate the interest of our youth to play the game. We anticipate this will further boost the membership of the recently formed Grenada Rugby Union.”

Honorable Lennox Andrews, Minister with responsibility for Tourism, acknowledged the newness of rugby to Grenada saying, “Life is a process of continuous change and this new sport to our island speaks to this idea of constant change – new ideas, new ways of living and new ways of doing things. Therefore, come December 2nd and 3rd, 2022 history will be made in Grenada.”  Minister Andrews continued, “it [GRW7s tournament] also demonstrates the importance of the tourism industry to our economy, given its contribution to hotels and restaurants, but also its strong linkages with agriculture, with music, with the creative industry, and of course with sport, the tourism industry contributes far more than we estimate.” Minister Andrews concluded by encouraging the population of Grenada to support the Grenada Rugby World 7s tournament.

Minister of State with responsibility for Youth, Sports and Culture, Honorable Ron Redhead stated, “This Rugby Tournament can create many opportunities for Grenadians including hoteliers, tour operators, vendors and our sports men and women, undoubtedly the intangibles of sport have a powerful influence on decision makers concerning the role of sport in economic development. The Minister further stated, “Indeed we anticipate that many of our Grenadians who have only seen rugby on television now have a chance to witness the sport in person. As a nation of naturally talented young people I do not doubt that there will be stars born following this tournament.”

Set to take place December 2nd – 3rd at Grenada’s Cricket Stadium, teams from as far as Canada, USA, England, Wales, Scotland, France and Fiji have already indicated their intention to travel to Grenada to compete this year, all fiercely vying for the $15,000 total prize money and much sought-after winner’s titles that are up for grabs.

In an official statement, GRW7s General Manager Brian Stollmeyer said the tournament, which has been running for over 30 years, is one of rugby’s most popular international events, especially for the Women’s divisions which will take precedence over the Men’s divisions in terms of prestige and prize money.

“This is our first year in Grenada and we are thrilled to be able to put on an event that will appeal to both locals and tourists alike,” he said. “After a two-year hiatus, what makes this year’s event especially unique is that we are now offering an entertainment and family-friendly element into the mix. In addition to world-class rugby matches, the 2022 GRW7s experience aims to also showcase a sample of Grenadian culture including local music, arts and craft stalls, culinary delights and much more.

In addition, because the local rugby community on the island is just starting to build momentum, we see this as the perfect opportunity for the general public to get to know more about the sport and to come and see for themselves the inclusive rugby spirit. I encourage everyone at home and abroad to come out in December and show your support for this exciting international event.”

“A big drawing card for this year’s event is its expanded format which will include a taste of ‘Pure Grenada’ complemented by the ‘Pure 7s’ rugby out on the pitch,” he said. “We are delighted to partner with the Grenada Tourism Authority to highlight Grenada not only as a unique tourist destination, but also as a premier sports event location for world-class competitions such as this one.”

Nicholson took the opportunity to put the call out to any potential event partners, both locally and internationally, to lend their support to the GRW7s.

“We have a variety of sponsorship and partnership packages which can be tailored to suit all manner of budgets,” he said. “Given the long legacy of the event, we have a proven track record of attracting significant local and global exposure through live streaming, social media promotion, and venue branding – just to name a few of our official distribution channels. We invite all businesses and individuals to consider partnering with us to expand the reach and visibility of their brand in the public domain and to lend their support to this ever-expanding event.”

The ‘Caribbean 7s’ Tournament began in Trinidad in the 1980s before moving to Tobago in 2011, and then on to Barbados in 2016. With this year’s move to the Spice Isle of the Caribbean, 2022 GRW7s will break new ground by strengthening the synergy between sports and tourism, and sports and entertainment, and provide teams, officials, and spectators an expanded event ‘experience’ with something for everyone.