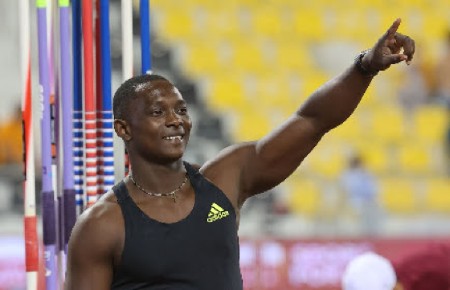 Grenadian Anderson celebrates his win at the Doha Diamond League on Friday.The 24-year-old measured a remarkable 93.07 meters on his final throw to break into the privileged 90m clique, beating the Czech Republic’s Jakub Vadlejch (90.88) into second while German Julian Weber finished third in 86.09.

Peters’ throw was also the best in the world this year and eclipsed his previous personal best of 87.31, while shattering the North, Central American and Caribbean record.

He had also set a new personal best in the fifth round when he tossed the javelin 90.19, as he engaged in a thrilling battle with Vadlejch in windy conditions at the Qatar Sports Club.

With the performance, Peters joined a prestigious club occupied by world record-holder Jan Zelezny (98.48) of the Czech Republic, Germans Johannes Vetter (97.76) and Thomas Röhler (93.90) and Finland’s Aki Parviainen (93.09), all of whom have surpassed the 90m mark.

Doha holds precious memories for Peters who claimed his World title here three years ago with a throw of 86.89.

“I came here twice,” he said. “I love to be here in Doha trying to get better and to be more in shape.”

Jamaican Shanieka Ricketts added to the Caribbean’s success with victory in the women’s triple jump, leaping 14.82m on her third attempt.

Barbadian Sada Williams was fourth in 52.09 while Jamaican Candice McLeod trailed in fifth in 52.37.

“ I’m disappointed with myself but it is a good start,” said McPherson.

“I hope to improve as the season progresses and I hope to perform well in the World Championships in Eugene.”

In the men’s equivalent, Trinidadian Jereem Richards finished third in 20.15 as American Noah Lyles crossed the line first in 19.72.