BRIDGETOWN, Barbados,  – Kieron Pollard has described as a “fantastic achievement” him being named by Wisden as the Leading T20 Cricketer in the World, and says he is hoping to create more history in the coming year. 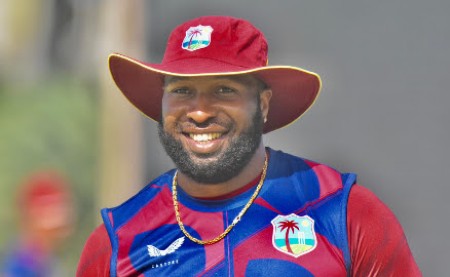 West Indies white-ball captain, Kieron Pollard.Wisden, cricket’s most authoritative and respected publication, made the announcement late Wednesday, noting that the West Indies white-ball captain had distinguished himself by “[helping] the Trinbago Knight Riders to CPL glory and the Mumbai Indians to another IPL title, displaying his well-renowned six-hitting skills along the way.”

Under Pollard, TKR played unbeaten last year to capture the Caribbean Premier League for a record fourth time. Weeks later, the Trinidadian played a key role in inspiring Mumbai to a successful defense of their IPL title and their fifth crown overall.

“[The year] 2020 has not been great for all of us, being hit by a pandemic. We did not expect something like this but we were able to use this time wisely, spend time with family, reflect and think about what we want to do,” Pollard said from India where he is currently turning out for Mumbai in the IPL which got underway last week.

“I got the opportunity to play some cricket as well and it has worked. Being able to be named T20 Player of the Year 2020 I think was a fantastic achievement in what would’ve transpired, and I just want to continue to make my family, my friends and my real supporters and people who support the Kieron Pollard brand proud.”

Pollard has emerged as one of the world’s leading T20 cricketers over the last decade, becoming renowned for his destructive lower order hitting, brilliant fielding and clever medium pace.

Currently, the 33-year-old sits second on the all-time list of run-scorers with 10 641 runs, only behind West Indies teammate Chris Gayle with 13 760, and has taken 293 wickets.

Pollard brought all of his experience to bear on the CPL campaign last year, averaging 51 with the bat and proving an inspiration as captain, as TKR marched imperiously through the tournament.

His record led to him being named last year on the International Cricket Council’s Team-of-the-Decade, which he labelled as “fantastic small achievements.”

“Winning CPL, 12 games on the trot without losing a game was fantastic, winning the IPL for a fifth time – I think we continued to break records and personally continued to score runs,” said Pollard.

“I just want to continue to entertain you fans, entertain my family, entertain my friends and at the end of the day, just try to do what God has given me talent to do, be it what format.

“Being named T20 Player of the Year [for] 2020 and also being named in the T20 Team of the Decade. These are fantastic small, small achievements.

Pollard said he was also pleased with his efforts this year, leading West Indies to a T20 and ODI series win over Sri Lanka last month, while becoming the third player to hit six sixes in an over in a T20 International.