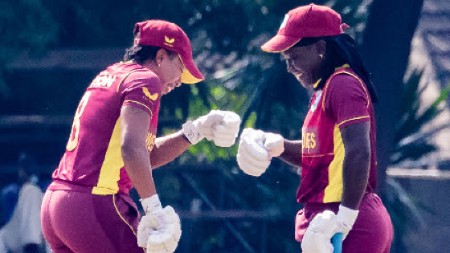 Player-of-the-Match Deandra Dottin (right) celebrates a moment with Chedean Nation during their partnership.Asked to chase a meagre 160 at Old Hararians, the Caribbean side cruised to their target in the 40th over with Player-of-the-Match Dottin slamming 73 off 87 deliveries and captain Stafanie Taylor seeing her side over the line with an unbeaten 41 off 54 balls.

Off-spinner Anisa Mohammed had earlier snatched three for 40 as Ireland Women, sent in, collapsed from 79 without loss in the 21st over, to 159 all out off 43 overs.

Fellow off-spinners Taylor (2-15) and Hayley Matthews (2-20), along with new-ball speedster Shamilian Connell (2-33) all supported with two wickets each.

Twenty-year-old Gaby Lewis top-scored with 36 while fellow opener Leah Paul struck 25 and the seasoned Eimear Richardson, a breezy 32 down the order.

“They (Ireland) got off to a decent start and we were able to peg them back with a couple of wickets,” head coach Courtney Walsh said afterwards.

“We managed to bowl them out in the end which was very good for us, and the batters [then] did the job. Deandra played extremely well supported by the skipper and we were very happy about that.

“On the field, we started a little bit slow but once Anisa broke the partnership … and we started getting those wickets, we got back into the game in terms of taking control and just dominating the entire game.”

Lewis punched four fours and a six while Paul struck a brace of boundaries, Ireland consolidating during the power-play before upping the tempo a little more afterward.

With the partnership becoming worrying, Mohammed removed Lewis caught and bowled off the first ball of the 21st over and then watched as new batsman Amy Hunter was run out next ball without facing a delivery.

Mohammed bowled Paul in the 22nd over to accelerate a slide which saw six wickets tumble for 22 runs in the space of 60 balls, as the innings was thrown into strife and never recovered.

The result was never really in doubt once Dottin got into gear, stroking eight fours and two sixes as she dominated a 61-run stand with Rashada Williams (8) before adding another 33 for the second wicket with Chedean Nation (17).

Dottin became the first of Richardson’s two wickets when she perished in the 25th over and Matthews (9) followed in the 31st but Taylor, who counted three fours in a measured innings, put on 34 in an unbroken fifth wicket stand with Shemaine Campbelle (5), to ease any worries.

West Indies Women face Sri Lanka in their next game on Saturday.