Windies: Successful T20 Tour a Confidence Booster for Next Series

BRIDGETOWN, Barbados – Cricket West Indies has hailed the just concluded five-match Twenty20 International series against England as a massive success, and says it has set the tone for the money-spinning three-Test series next month against the same opponents. 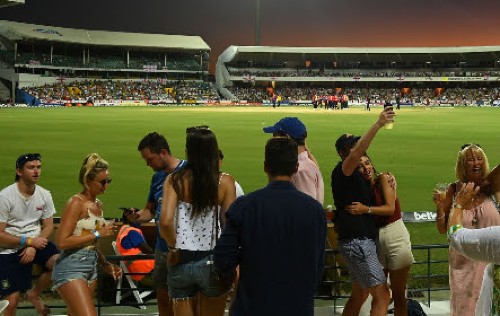 A section of the Kensington Oval crowd during the T20 International series against England.West Indies stunned the world number ones 3-2 after winning last Sunday’s series finale at Kensington Oval, the January 22-30 tour marking the return of fans for the first taste of action at the storied venue since the start of the COVID-19 pandemic two years ago.

With Barbados experiencing its third wave of the pandemic, the venue was allowed to host only 50 per cent of its capacity, with only fully vaccinated fans permitted to purchase tickets.

CWI said an average of 4 300 fans attended each match – all day-night affairs – and stressed that the “successful return of spectators in large numbers” had been a much-needed confidence booster for organizers with the marquee England Test series already on the horizon.

“We are extremely pleased with the way the Betway T20I Series was delivered, following such a long gap without fans being able to attend,” said CWI commercial director, Dominic Warne.

“Blessed with some outstanding performances on the field, fans created an amazing atmosphere in the stands in a safe and secure environment provided by a great collaboration between all parties.

“The Ministry of Health and Wellbeing’s officials provided a smooth, efficient and friendly validation process on entry to the stadium to confirm fans’ vaccination status.”

He continued: “This gives everyone involved in the staging of the event confidence and assurance ahead of the forthcoming Apex Test Series in March.

“Not only did we enjoy the return of the world-renowned West Indies carnival cricket atmosphere, the successful return of fans will have generated much-needed economic benefit for the region.

“We want to thank the English visitors who travelled in huge numbers as well as the returning West Indies fans who brought their special vibes to support their favorite team.”

According to CWI, an average of 2 500 travelling England fans attended each game and it was only the fifth T20 International where local fans just marginally outnumbered visitors.

England’s tour of West Indies has traditionally been a huge commercial success for the host board, and has also served as an economic driver for the region’s tourism sector.

When England last toured the region back in 2019, CWI chief executive Johnny Grave said the series marked a “big year financially” for the cash-strapped regional governing body, with the organization set to rake in millions of dollars.

Kensington Oval will host the second Test against England from March 16-20, with the Vivian Richards Cricket Stadium in Antigua launching the series on March 8.

Grenada’s National Stadium will be the venue for the third Test from March 24-28.