Windies Still up for Proteas Clash Despite England Debacle: Simmons 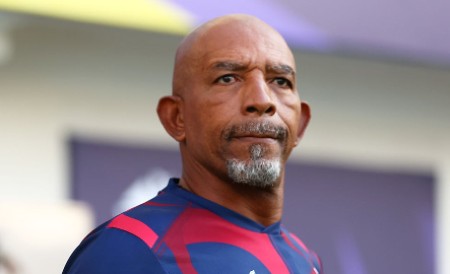 West Indies head coach Phil Simmons.Speaking in a media conference on Sunday, Simmons pointed to the “personal pride” in the squad and said that would serve as the ultimate motivator to hit back immediately.

“I think everyone is looking forward to the next game,” Simmons said in the wake of his side’s six-wicket defeat here.

“I think when you have a game like [we had against England] and especially the opening game of a World Cup, everybody is [always] looking forward to the next game, wishing that the next game was tomorrow [instead] of two days away.

“So everyone is looking forward to the next game and not just because it’s South Africa but it’s the next game to make amends for what happened [on Saturday].

West Indies were bundled out cheaply for 55 off 14.2 overs after being sent in, with veteran Chris Gayle the only batsman to reach double figures with 13.

The lethargy which had overshadowed their batting in the two warm-up defeats last week continued, as the Kieron Pollard-led side slumped to 31 for four at the end of the first power-play and 44 for six at the 10-over mark.

Simmons conceded that losing regular wickets had not helped his side’s attempts to rebuild.

“I think we just, after losing a couple early wickets, needed to regroup and we kept just losing wickets when we were supposed to be regrouping.

“So I don’t think anyone lost sight of the goals we had for each phase, I just don’t think we assessed the sessions when we lost wickets.”

“It’s simple for us. We know what we have in the team and it’s about assessing the situations of the game and playing that situation,” he explained.

“When we go back to the times West Indies have been beaten badly, we’ve come back strong so we’re looking to come back very strong on Tuesday.

West Indies suffered heavy defeats to Pakistan and Afghanistan in their official warm-ups but Simmons pushed back on suggestions those results had hinted at the debacle to come against England.

“So I don’t think when you look back at the [warm-up] matches you’re going to think [it was an indicator of a heavy defeat against England]. We played badly in the two matches – the second match especially – but it’s not to say if you do that, we’re going to play like [we did on Saturday].”