Chasing for the third straight time, West Indies were this time confronted with a more manageable target of 146 and overhauled it with an over to spare, courtesy of contrasting half-centuries from Shamarh Brooks (56 not out) and Brandon King (53). 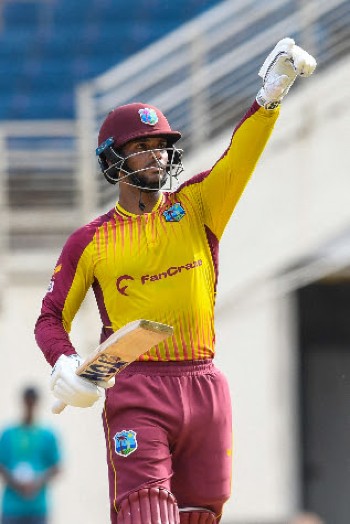 Brandon King celebrates his fifth T20 International fifty on Sunday. (Photo courtesy CWI Media)Man-of-the-Series Glenn Phillips had earlier top-scored with 41 from 26 deliveries but New Zealand never really found their best gear after choosing to bat first at Sabina Park, and could only muster 145 for seven from their 20 overs.

Fast bowling all-rounder Odean Smith again led West Indies’ attack with three for 29 while left-arm spinner Akeal Hosein supported with two for 28, the Black Caps laboring to 64 for three at the half-way mark and managing only 39 runs from the last five overs.

The victory came on the back of defeats in the opening two Twenty20 Internationals and a whitewash in the three-match series against India last month.

With Rovman Powell leading the side in the absence of captain Nicholas Pooran, the hosts made a strong start when Martin Guptill (15) missed a sweep at Hosein and was bowled leg stump in the third over with the score on 18.

Devon Conway (21) and the promoted Mitchell Santner (13) then added 30 for the second wicket and when both fell to leave the Black Caps on 57 for three in the ninth, Phillips and captain Kane Williamson (24) put on a further 47 for the fourth wicket to push the score beyond the 100-run mark.

Phillips lashed four fours and a brace of sixes while Williamson spent 27 balls at the crease and counted two fours, before New Zealand lost a clatter of wickets at the back end to decline swiftly.

In reply, King thrilled in his first match for West Indies in front of his home crowd, belting four fours and three sixes as he posted an entertaining 102 for the first wicket with Brooks who counted three fours and two sixes in a patient 59-ball knock.

King eventually holed out to deep square in the 14th over off seamer Tim Southee and Devon Thomas perished in the next over for five, but Powell arrived to smash an 15-ball unbeaten 27 in a 37-run stand with Brooks, to see West Indies home.