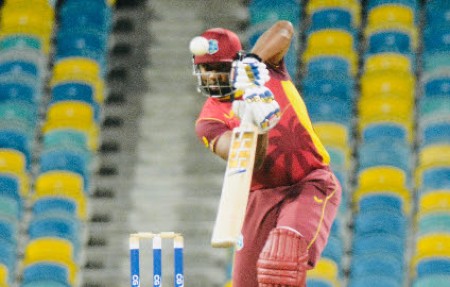 Kieron Pollard plays through the off side during his half-century.Chasing a revised target of 257 for victory off 49 overs at Kensington Oval, West Indies collapsed in a heap for 123 all out in the 27th over.

Captain Kieron Pollard, in his first innings against the Aussies after missing the five-match Twenty20 series, top-scored with 56 off 57 balls but Hayden Walsh Jr (20) was the only other player to reach 20.

Evin Lewis fell to the very first ball of the innings, caught and bowled by Starc, and the home side never recovered, slumping even further to 27 for six in the eighth over.

Pollard, who belted five fours and three sixes, inspired a 68-run, seventh wicket partnership with Alzarri Joseph (17) to patch up the innings.

However, once Joseph was bowled by seamer Mitchell Marsh in the 19th over, West Indies lost their last four wickets for 28 runs.

Opting to bat first earlier, Australia had racked up 252 for nine in a contest reduced to 49 overs following two rain breaks during the innings.

Walsh, who led the West Indies attack during the recent five-match Twenty20 International series, finished with a career-best five for 39.

He was supported by fast bowler Joseph (2-40) and left-arm spinner Akeal Hosein (2-50), both of whom claimed two wickets.

Captain Alex Carey top-scored with 67 off 87 deliveries while Ashton Turner struck a breezy 49 off 45 deliveries, the pair staging a fifth wicket stand of 104 to revive the innings after a clatter of wickets.