WELLINGTON, New Zealand – West Indies resorted to old habits with another inept batting effort, laying the groundwork for their seven-wicket thrashing at the hands of unbeaten Australia in the ICC Women’s World Cup here Tuesday. 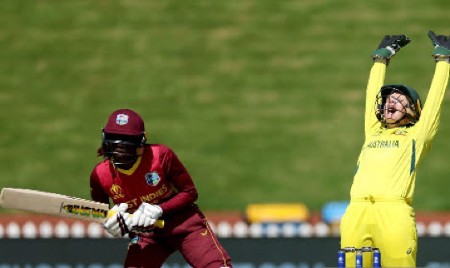 Wicketkeeper Alyssa Healy appeals successfully for an lbw decision against West Indies captain Stafanie Taylor.Choosing to bat first at the Basin Reserve, the Caribbean side could only muster 131 all out in the 46th over despite captain Stafanie Taylor 50 off 91 deliveries, with seamer Ellyse Perry (3-22) and off-spinner Ashleigh Gardner (3-25) wrecking the innings with three wickets piece.

The target was never going to be enough and Rachael Haynes ensured it was not, hammering an unbeaten 83 off 95 deliveries as the Aussies got over the line in the 31st over with time and effort to spare.

West Indies believed they were in with a shout when they reduced Australia to seven for two in the fourth over but the dream was short-lived, Haynes masterminding the run chase with two half-century stands.

The defeat was the second on the trot for West Indies following their 155-run crushing at the hands of India last weekend.

“Obviously going into the second innings we knew we didn’t have the score that we wanted on the board,” opener Hayley Matthews said afterwards.

“But at the same time we’ve shown a lot of faith throughout this entire tournament and we were looking to do nothing different today. We knew we had a chance once we went out there and took early wickets like we would in any other game.”

He added: “Coming into this tournament, we knew our first four games were probably going to be our four hardest.

“I think we kind of said to ourselves [that] if we could get at least two or three wins over these first four games, we will be in a really strong position and we’ve done exactly that.”

West Indies tottered at the start, losing Matthews and number three Kycia Knight both without scoring in the second over from Perry with four runs on the board, before Taylor and Deandra Dottin (16) steadied the innings in a 30-run stand.

Opener Dottin had struck two fours when she drove extravagantly at a wide ball from Perry and edged to Meg Lanning at slip, paving the way for Taylor to attempt another rescue effort in a 36-run, fourth wicket stand with Shemaine Campbelle (20).

The recovery was promising much when Gardner struck twice in the 23rd over with the score on 70, Campbelle tugging a catch to short mid-wicket and Chedean Nation lasting four balls before playing down the wrong line and having her off-stump clipped without scoring.

And those two wickets broke the West Indies resistance as the last seven wickets went down for 61 runs, Taylor eighth out in the 41st over playing back to Gardner and being adjudged lbw.

Requiring a Herculean effort, West Indies enjoyed an explosive start when Alyssa Healy (3) drove a firm return catch to Matthews in the third over and captain Meg Lanning (0) threw her bat at a wide one from speedster Shamilia Connell for Matthews again to snare a stunning catch at above her head at slip.

The joy was brief, however, Haynes lashing nine fours to dominate a 51-run, third wicket stand with Perry (10) before adding a further 74 in an unbroken fourth wicket partnership with Beth Mooney (28).

With the defeat, West Indies remained fifth on four points and face Bangladesh in their next game on Friday in Mount Maunganui.