KOLKATA, India – West Indies watched a late challenge fizzle out as they crashed to a heart-breaking 17-run defeat to India in the final Twenty20 International here Sunday, to leave the six-match white-ball tour of the subcontinent with nothing to show for their efforts. 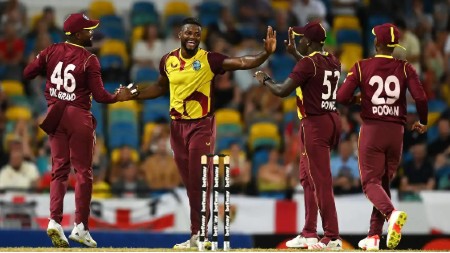 Romario Shepherd goes on the attack during his cameo 29 in Sunday’s third T20 International. (Photo courtesy BCCI)In pursuit of 185 at Eden Gardens in order to avoid a second whitewash on the tour, West Indies remained in the hunt deep into the contest but once left-hander Nicholas Pooran was dismissed for 61 at the start of the 18th over with 38 required from 18 deliveries, the run chase was quickly derailed.

All-rounder Romario Shepherd tried to salvage the chase with a robust 29 off 21 balls, including a four and three sixes, but seamers Harshal Patel (3-22) and Shardul Thakur (2-33) combined to snuff out any lingering threat from the tourists.

The result came on the back of a six-wicket loss in the opening T20I and an eight-run defeat two days ago, the series loss following up a similar whitewash in the preceding One-Day International series in Ahmedabad.

“Learning to execute at the back end is something we need to work on. From a bowling perspective I thought that for the first 14, 15 overs in this game, we had India actually right where we wanted them,” captain Kieron Pollard said afterwards.

“And [that has happened] right throughout the series, it was just a matter of trying to finish off the games at the back end.

“From a batting perspective, we did fairly decently. It was just a matter of overhauling the total in front of us.”

Opting to bowl first, West Indies appeared to be shackling the hosts when they limited them to 98 for four after 15 overs.

However, Suryakumar Yadav exploded to top score with 65 off 31 balls, powering a 91-run, fifth wicket stand with Venkatesh Iyer (35 not out) as India gathered 86 runs from the last 30 balls to end on 184 for five.

Suryakumar belted a four and seven incredible sixes while Venkatesh chipped in with four fours and a couple of fours, undermining all of West Indies’ previous good work.

Holder had earlier knocked over Ruturaj Gaikwad (4) cheaply in the third over with 10 runs on the board but opening partner Ishan Kishan (34) and Shreyas Iyer (25) posted 53 for the second wicket to stabilize the innings.

Both fell in the space of eight balls with three runs added as India lost three wickets for 30 runs before Suryakumar took charge.

But Pooran and the in-form Rovman Powell (25) counter-attacked in a 47-run, third wicket stand, ensuring the required run rate remained within easy reach.

Pooran, with half-centuries in his last two innings, thumped eight fours and a six as he raced to his eighth T20I half-century off 39 balls in the 16th over, while Powell clubbed two fours and two sixes in a 14-ball cameo.

India regained control when Powell was brilliantly caught at fine leg off Harshal in the seventh over, the dismissal sparking a slide which saw West Indies lose four wickets for 27 runs to slip to 100 for six in the 12th over.

Pooran and Shepherd then added 48 off 31 balls for the seventh wicket to set the game up nicely but Pooran’s dismissal, skying to wicketkeeper Kishan, ended West Indies’ hopes of rescuing something from the series.