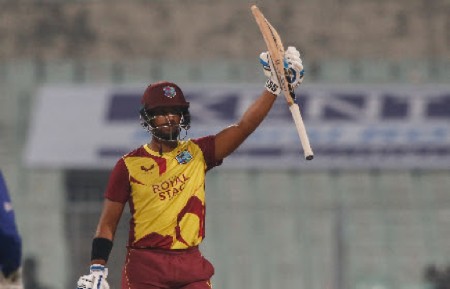 Left-hander Nicholas Pooran celebrates his half-century on Wednesday. (Photo courtesy BCCI)Sent in at Eden Gardens in the opening game of the three-match series, the Caribbean side struggled to 157 for seven off their 20 overs with Pooran hammering 61 off 43 deliveries and left-hander Kyle Mayers getting 31 from 24 balls.

Captain Kieron Pollard weighed in with a 19-ball unbeaten 24 at the death as West Indies gathered 61 runs from the last five overs, but India’s bowlers still managed to keep the total below par.

In reply, captain Rohit Sharma belted 40 from 19 balls, in a 64-run opening stand with Ishan Kishan whose 35 came from 42 deliveries.

When a cluster of wickets saw the hosts stumble to 114 for four in the 15th over, Suryakumar Yadav arrived to hit an unbeaten 34 off 18 balls in an invaluable 48-run, unbroken fifth wicket partnership with Venkatesh Iyer (24 not out), as India crossed the line with seven balls to spare.

“If I’m being honest, I think between overs six to 15, we only scored [52] runs in nine overs so I think if we [could’ve gone] up a notch and gotten 18-20 runs [more] in those overs, it would’ve been competitive on this ground,” Pollard said afterwards.

“We knew we were 15-20 runs short but we knew if we got early wickets we could have put them under pressure but they got off to a good start…so after six overs they were obviously in front of us.

Brandon King perished for four to the fifth ball of the innings but Pooran held the innings together with a quality knock, putting on 47 for the second wicket with Mayers and a further 45 for the sixth wicket with Pollard.

Pooran lashed four fours and five sixes, reaching his half-century in style off 38 balls at the start of the 17th over from leg-spinner Yuzvendra Chahal by first clearing the ropes at mid-wicket and then finding the backward point boundary.

He lost Mayers, lbw to Chahal in the seventh over, after the Barbadian struck seven fours and Roston Chase then dithered 10 balls over four before being hit plumb in front by 21-year-old leg-spinner Ravi Bishnoi, who claimed two for 17 from four overs to earn Man-of-the-Match honors on debut.

Rovman Powell (2) holed out to deep mid-wicket in the same over from Bishnoi – the 10th of the innings – leaving Pooran and Pollard to find the late acceleration.

Facing a straightforward required run rate of eight runs per over, India gathered 58 runs in the first power-play, thanks to Rohit who belted four fours and three sixes before finding Odean Smith on the ropes at mid-wicket off Chase’s off-spin in the eighth over.

Ishan and maestro Virat Kohli (17) added 29 for the second wicket and appeared to be taking India safely to their target when three wickets tumbled for 21 runs off 16 balls.

Chase (2-14) intervened to remove Ishan, the left-hander picking out Fabian Allen in the deep; Kohli fell three balls later in the next over, chipping left-arm spinner Allen to Pollard at long off and Rishabh Pant (8) lapped a catch to short fine leg in the 15th over off left-arm pacer Sheldon Cottrell.

Even though the slide allowed West Indies back into the game, any hopes of a comeback quickly dissipated, however, as Suryakumar bludgeoned five fours and a six and Iyer, two fours and a six, to snuff out the Windies’ threat.