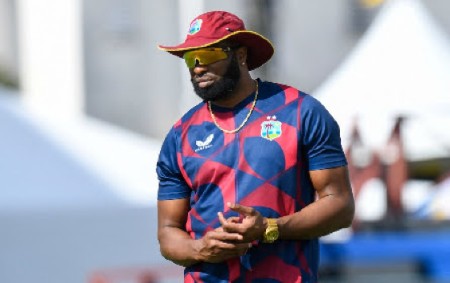 West Indies captain Kieron Pollard.The Caribbean side suffered a 3-0 whitewash in the One-Day International phase of the tour in Ahmedabad last week after their batsmen mainly produced several inept performances.

However, with a healthy break to rest and recover since then, Pollard said West Indies would be looking to turn the page on what transpired in the ODIs.

“Yes, the momentum is with them (India) but that’s done and dusted,” Pollard told a media conference on Tuesday.

“We can’t live four days back; we’ve got to live in the present and we’ve got to focus on what we need to do.

West Indies have endured a topsy-turvy run in the shortest format over the last 12 months, losing four of their last seven series and 11 of their last 25 T20 Internationals in bilateral tours, while winning 11 matches.

However, their series win over England last month in Bridgetown when they beat the world number ones 3-2 in a closely contested affair, has given the two-time World champions some hope.

And Pollard said his side had learnt several important lessons against England which they would be looking to implement against the Indians.

“For us, it’s about consistency,” said Pollard who is expected to return for Wednesday’s opener at Eden Gardens after missing the last two ODIs through injury.

“I thought we had a very good series against England. We faltered a couple times with the bat. At the back end of the innings, we can be a little bit better at executing and [in terms of] our fielding performances, we can take it up a notch as well.

“That’s a couple areas I think we can definitely improve and just try to be as consistent as possible.

“For us, it’s about trying to continue to improve in all facets of the game and executing to the best of your ability.”

West Indies boast an unflattering record against India in T20s, winning only one of their last nine meetings in losing their last three series.

Despite that record, Pollard said his side would not be daunted, and would approach the series with confidence in their ability and plans.

“Each and every time we step on the cricket field, we expect to do well. We don’t go out there not expecting to do well,” he stressed.

“Yes, from a one-day perspective it hasn’t been going how we want it to go but it’s the same thing when we come [on Wednesday] – we go through the process, we plan and then hopefully we can deliver on the cricket field.”