BRIDGETOWN, Barbados – West Indies bundled England out for their lowest total in eight years and lowest-ever on Caribbean soil, to snatch a dominant nine-wicket victory and a 1-0 lead in the five-match Twenty20 International series here Saturday. 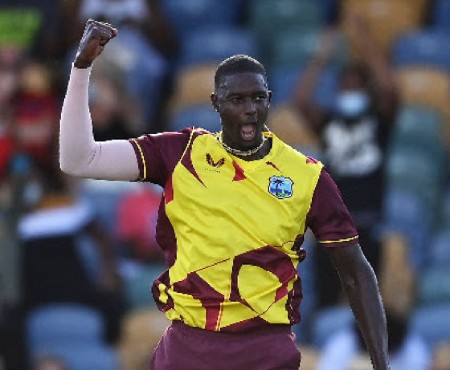 Fast bowler Jason Holder celebrates one of his four wickets against England on Saturday.Bowling first in seam-friendly conditions in the first international game at Kensington Oval in two years, West Indies dismissed the world number ones for 103 in the final over, with fast bowler Jason Holder picking up career-best figures of four for seven.

His new-ball partner Sheldon Cottrell supported with two for 30, the pair combining to reduce England to 26 for four at the end of the first power-play.

The visitors seemed to be careening towards a record low at 49 for seven in the 12th over but Barbados-born all-rounder Chris Jordan blasted three sixes in 28 off 23 balls while Adil Rashid chipped in with an 18-ball 23 with three fours, to get the innings into triple figures.

Brandon King then punched his second half-century in three innings with an unbeaten 52 off 49 deliveries, while left-hander Nicholas Pooran (27 not out) joined him to take West Indies home with 17 balls to spare, after Shai Hope perished for 20.

“That’s the sort of blueprint we’ve been asking the guys to come and try to put on show,” captain Kieron Pollard said.

“We’re really happy for the guys in that dressing room. Winning games for us is a rarity at this time and being able to come out and win a cricket match, it wasn’t easy. And to see the young guys finish it off … was fantastic.”

Jason Roy (6) slogged a six off the fifth ball of the opening over to break a spell of four dot balls but then lost his middle stump to a swinging full toss from Cottrell, off the final delivery.

Holder removed Tom Banton for four in the next over to a catch at the wicket and off the very next delivery, got Moeen Ali to scoop the first ball he faced low to Fabian Allen at point.

When James Vince picked out Darren Bravo at cover off Cottrell in the fifth over for 14, England had lost their top order and were desperately in need of a rebuild.

But left-arm spinner Akeal Hosein broke the partnership when he got Jordan to hole out to long off in the 17th over and Holder returned to claim the last two wickets to end the innings.

“We had a really perfect day to be honest. It’s not much I can really pinpoint that we did wrong. The challenge is being consistent and repeating it tomorrow.”

Facing a straightforward run chase under lights, West Indies were guided by King, the right-hander posting 52 for the first wicket with Hope and a further 52 in an unbroken second wicket stand with Pooran.

All told, King struck four fours and a six, reaching his second T20I half-century in the 17th over with a single down the ground off new-ball pacer Saqib Mahmood.

Hope was drawn from his crease and stumped off leg-spinner Rashid in the tenth over but Pooran arrived to belt two fours in a measured 29-ball knock to help King see the victory through.

The two teams meet again Sunday in the second match of the series.