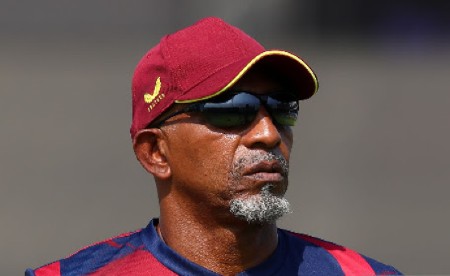 West Indies head coach Phil Simmons.West Indies failed to reach 200 in any of the three matches at the Narendra Modi Stadium, dismissed for 176, 193 and 169, with all-rounder Jason Holder the only player to notch a half-century.

“It (batting) does need urgent attention because it has just lost us the last two games,” Simmons said.

“When you’re bowling India out for 230 and 260 you expect to chase it. Just under a year ago we were cruising to 280 and 290 against Sri Lanka who have similar spinners and things like that.

The result comes on the back of a shock series loss to Ireland in Jamaica last month, where West Indies’ batting was again at fault in the three matches at Sabina Park.

And against India here, West Indies failed to build partnerships, often losing wickets in clusters and failing to negotiate tough periods of play.

While stressing that technique was not an issue, Simmons pointed to a lack of situational awareness and the manner of dismissals, as the major stumbling blocks for his batsmen.

“They’re all batsmen who can bat. Most of the guys who played in that top five or six have Test hundreds or Test runs so they can bat.

“We can’t be a 100 for six in 20-something overs in a 50-over game and that’s the crux of the matter. They have to assess the situation and play accordingly. In some situations we are assessing but our execution is not the best.”

And having watched West Indies lose their last three ODI series on the trot, Simmons said the situation needed to be arrested quickly.

“It doesn’t make for good watching as we’ve seen and it’s something that players have to sit and get right as soon as possible. We can’t keep going like this.”

He added: “We’ve got to make sure that we do the right things moving forward to get the batting lineup to function as a batting lineup and to have big partnerships and assess the thing properly. It’s hurting but we’ve got to think about how we solve it.”