BRIDGETOWN, Barbados – Recent successes against England at storied Kensington Oval has infused West Indies with further hope of a positive result in the second Test, but captain Kraigg Brathwaite has underscored the importance of starting from scratch when the two teams renew rivalries here Wednesday. 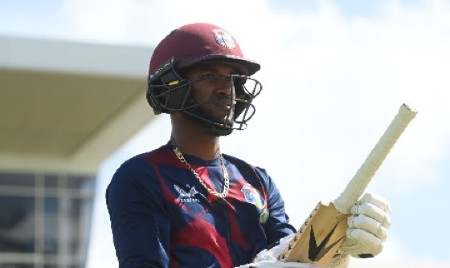 Kraigg Brathwaite is deep in thought during a training session at Kensington Oval ahead of Wednesday’s start of the second Test.In their last meeting here three years ago, West Indies pulled off a quite astonishing innings and 381-run victory inside four days, stunning the English and laying the platform for a shock 2-1 win in the three-match series.

But captain Kraigg Brathwaite has labelled the result as “history” and pointed out that even last week’s drawn encounter in the first Test in Antigua also needed to be forgotten, as West Indies sought to begin the second Test with a clean slate.

“You could draw on it (Test win 2019) in terms of different things we did as a bowling unit on the pitch,” Brathwaite told reporters Tuesday.

“Obviously it’s a different pitch [but] I think it is history to be honest. I think we have to really look to the future and [focus on] discipline as I said, especially from a bowling point of view.

“We got four wickets early [in the opening Test last week] and then we went three runs an over for a period. So I think we can draw on some things that we did well as some of the players but I think we’ve got to buckle down and start fresh.”

West Indies have not lost to England at the Oval in nearly two decades. In 2015, they notched a five-wicket triumph inside three days and six years earlier, drew a high scoring encounter when they piled up 749 on a flat track.

In fact, West Indies have lost just twice – in 1994 and 2004 – to England at the Oval, the venue remaining somewhat of a fortress even in the home side’s years of decline.

But even with history behind them, Brathwaite said it was critical West Indies executed properly while avoiding the mistakes which plagued them in last week’s draw on a flat track at the Vivian Richards Cricket Stadium.

“I think we’ve just got to deal with the processes. I think that’s important,” he pointed out.

“[Nkrumah] Bonner led the way with the batting [and] we got 350 in the first innings [in Antigua] so it’s trying to repeat that, being consistent with getting runs.

“Then obviously the bowling is just being a little more disciplined in terms of the middle periods and probably being a bit tighter. [Conceding] under three runs an over and creating that pressure would help to get more wickets in the middle order.”

West Indies will debate the inclusion of a spinner, left-armer Veerasammy Permaul proving ineffective last week as he sent down 25 overs in the game without claiming a single wicket.

However, there will be little discussion over the four-pronged seam attack which toiled manfully with limited success in the first Test.

And all eyes will be on marquee seaner Kemar Roach who enters the game with 235 wickets, needing just one to go past the legendary Sir Garry Sobers and move into sixth spot on the West Indies all-time list.

“He’s been remarkable for West Indies to be honest. I look forward to him leading the way,” Brathwaite said of the 33-year-old.

“He’s been leading the way now on and off the field and I look forward to him doing well and bringing that energy into the bowling unit.

“All the bowlers are looking forward to it. Obviously we have a plan for each batter, it’s just to go out there and stick to those plans for as long as possible.”

England have announced that speedster Mark Wood, who pulled up with injury in the first Test, will miss the Oval fixture after failing to recover.

The fastest of the touring side’s bowlers, Wood has been replaced by pacer Saqib Mahmood who is uncapped in the longest format.

Still, Brathwaite cautioned this was no cause for complacency.

“Obviously he bowls pretty sharp and obviously he will be a big miss for England but I think they [still] have quality bowlers,” he noted.